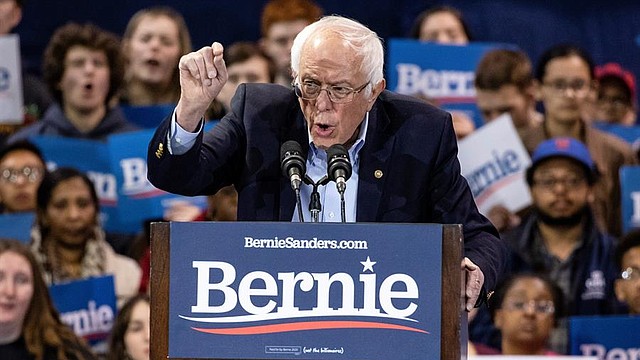 To date, primary election results show that delegates favor Bernie Sanders by almost twice as much as his closest contenders- Mayor Pete Buttigieg, followed by Joe Biden in third place. Leading up to “Super Tuesday,” polls are showing Mayor Buttigieg dropping in the standings, while the champion of the so-called “democratic socialism” maintains the lead, followed by the former US Vice President and Mike Bloomberg sliding into third.

Now, how to read these previous results and projections? Here I make my assessment.

Next Tuesday will be of great importance for the Democratic party, as the number of delegates to be declared exceeds one thousand (so far 100 delegates have declared across three states). Thus, if this trend continues, by the end of the primaries the most radical contender of the Democratic party, Sanders, could be dangerously nominated and will face off against Trump in the next Presidential Election.

In one of the debates, Sanders said that the current President represents a danger to the country. Notwithstanding his proposals for Medicare for All, College for All, and the Green New Deal, I fear that Sanders is the greatest threat to the well-being of our political and economic system and even more serious, to democracy. These platforms are enticing solutions to unresolved issues of the “establishment” plaguing citizens, specifically younger generations.

The fundamental problem is that the Democratic Senator presents a proposal that is essentially outside the umbrella covered by the American system. That is, capitalism is essentially the backbone by which the Democratic and Republican parties coexist, spanning beyond their ideological differences. However, Sanders exposes a third way, Socialism. Incompatible with American values, Socialism represents brutal repression and lack of freedom which is held by regimes such as Cuba, Nicaragua, and Venezuela. Not only does Sanders not show disapproval against such authoritarian regimes, but he has dared to praise them, just as he did recently with Fidel Castro’s literacy program as a positive element of his administration on the Island. So, I wonder: Why emphasize an aspect that practically loses strength in the face of the atrocities committed by the regime, in the face of abuse of power, repression, controls, and lack of freedom? Why not recognize Maduro and Ortega as dictators, all while rejecting Trump’s approach to Kim Jong-un? What is Sanders playing at? This is the dilemma.

But if we want to dive deeper into the waters, the radical discourse that Sanders maintains against the rich would not only jeopardize the economic stability of America in the face of a future mandate, but also be part of the same socialist script as politicians, like the late Hugo Chávez in Venezuela, wanted to engrave in the collective imagination. "The rich are bad" was the favored phrase that motivated Chávez to expropriate much of Venezuela’s national production system, and destroy a country with the world's largest oil reserves, leading one of the most prosperous nations in the hemisphere to ruin.

That being said, I do not believe that moderate Democrats want to support these anti-values of "the land of the free and the home of the brave". So, unfortunately, the result could favor Trump if confronted by Sanders. This socialist politician is taking relevance in the public debate arena for his radical way of doing politics, spearheaded by the current administration. Concurrently, the inaction of the Democratic party, who is now supporting Sanders, is not making an urgent internal reform to purify ideologically and detach from the radical far left who want to captivate the dissatisfied, many of whom are young, millennials like myself, who represent not only the present, but the future of the nation.

We can ask ourselves: where is the center, then? In quoting Buttigieg's words, “My point is that people have been motivated to want to blow up the establishment. And Bernie Sanders and Donald Trump represent radically different ways of doing that,” Buttigieg told NBC News’s Josh Lederman.

The legitimate demands of new generations must be met, but without populism, without chasing away those who have built the backbone in which the country is sustained.