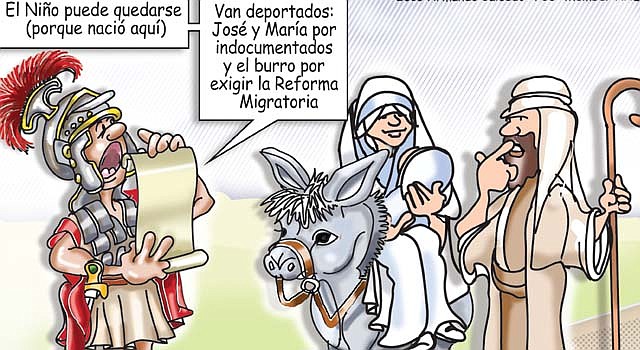 1. Christmas: Celebrating the life of an immigrant Jewish family.

2. Belief: After two decades of working with the Hispanic community, writing about Latino concerns, and listening to the human story, there is always a heart breaking common denominator: The story of people who convinced themselves that if they worked hard enough and achieved enough, they would be rewarded with citizenship. They thought that in this country you could earn it.

3. Attitude: Let’s question politics and media that hurt our community and let’s question ourselves: treat women like equals, stay in school, stay away from drugs, and, if you’re a parent, keep your child disciplined and focused on academics. All dreams have a price, and we pay for them with our everyday behavior. Only we, as individuals, are the key to change.

4.Generation: The experts claim that Hispanic Millennials have many common qualities with their American colleagues: youth, a familiarity with technology and social networking, and an independent spirit. But there are some things that make Hispanics unique: their ties to their Latin roots, their strong family relationships, and their attachment to their countries of origin. This generation brings with it a cultural wealth that can make the US more powerful and more prosperous than ever, but only if this country learns to appreciate and capitalize on it.

5. Immigration: The Senate immigration bill —currently in Limbo a.k.a the House— appropriates an obscene amount of money to border security. It seems that some in Congress are trying to pervert the meaning of immigration —a human phenomenon, the great catalyst of the American experience.

6.Minority?: In a country increasingly multicultural, where the “minority” is mainstream in many jurisdictions, we must leverage the asset of our diversity to enrich our lives as Americans and effectively communicate with the world.

7. Spanish: The other language of the land whose presence enables a country of English speakers to become more powerful and influential –two words with economic and cultural repercussions. The rise of Spanish speakers in America is not for the narrow minded, nor for the impatient.

8. Unconstitutional House: The House of Representatives must act regarding the bipartisan Immigration Reform bill passed by the Senate (June 27, 2013). This is not a political issue, it is a constitutional mandate: Supreme Court’s Arizona Decision (June 25, 2012). The incapacity of the House to act is in practice a suspension of representative government.

9. Immigration Reform: It’s not about the perfect, but the possible, and, in this case, the necessary.