A Tale of Two Bills

The best and worst times in US immigration reform history 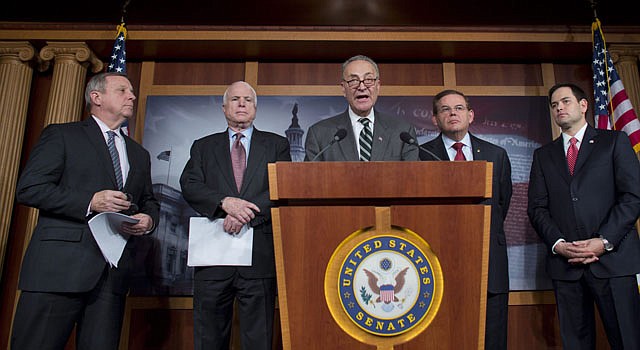 History repeats itself when there is not enough power base to support or pressure legislators. Let’s build it —and, please, start with the House next time.

Everyone is going straight to Heaven and straight to hell. Basically, it is just like the current immigration reform bill only seen by obstructionist legislators in terms of extremes. But in terms of our recent history, this is the frustrating tale of two Senate Bills in the context of an eerie déjá vu.

Senate Bill 2611, —the McCain-Kennedy bill— was brought to a vote on May 25, 2006 and passed 62-36. The late Democratic Senator, Ted Kennedy, and the Republican Senator John McCain were the bipartisan “Gang of Two” of their time. Then in the Fall of 2006, the House of Representatives refused to move on comprehensive immigration reform.

2013: The non-partisan Congressional Budget Office (CBO) estimated this reform bill would reduce the US fiscal deficit by $197 billion over the next ten years. The Social Security Administration said that this bill, if it becomes law, would help add $276 billion in revenue over the next 10 years while costing only $33 billion.

2006: The CBO projected that the legislation ultimately would increase the size of the U.S. economy by between 0.8 percent and 1.3 percent —amounts that were higher than the Bush Administration estimate of the impact of the 2001 and 2003 tax cuts on the economy if the tax cuts were made permanent.

2013-2014: Currently, Obama is the President of “no se puede” and of unfulfilled immigration promises —aka “The Deporter in Chief”— for Hispanics. Democrats are the politicians who best play the blaming game, and Republicans seem to have no soul while skating on thin ice.

2006: In his second term President Bush continued to advocate for comprehensive immigration reform. His allies were Kennedy and McCain. His enemies came from both sides of the aisle. Bush was probably the most committed President on immigration reform: He met with Mexican President Vicente Fox nine times to develop a comprehensive bi-lateral initiative in search of the “whole enchilada.” The 2001 September 11th terrorist attacks brought a halt to the Fox-Bush expectations, but early in 2004 Bush gave a speech outlining a plan that would provide undocumented immigrants legal status and ultimately citizenship. Eventually the House killed the bill.

The moral of the story: History repeats itself when there is not enough power base to support or pressure legislators. Let’s build it —and, please, start with the House next time.