Salvadorans prepare for a new era

Salvadoran community could be transformed by Obama’s executive action 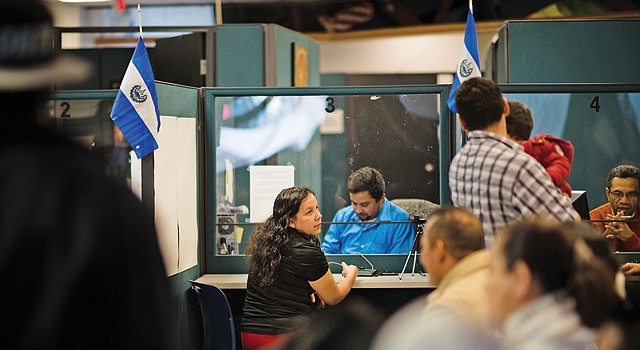 The storefront consulate on Wisconsin Avenue NW has long been a cramped but friendly resource for immigrants from El Salvador — by far the largest such population in the Washington region — who had nowhere else to turn in family and legal crises.

After President Obama announced his plan to protect up to 5 million undocumented immigrants from deportation, the tiny consulate got a lot busier. With more than 100,000 Salvadorans expected to apply there this spring for the three-year deportation relief, consular officials are scrambling to hire extra staff and launch mobile services in the suburbs.

“It is our duty to do whatever we can to help people apply,” Sunny Soto, the vice consul, said. “They’re going to need passports, birth certificates, marriage licenses, help with children’s school records. It’s going to be a documentation flood. Obama’s action may affect more Mexicans than any other group, but it is expected to have a seismic impact on Salvadoran immigrant communities, the two largest of which are in Los Angeles and greater Washington. More than a third of the estimated 675,000 undocumented immigrants from El Salvador live in the Washington area.

According to a survey by the Pew Research Center, when the president’s new action is added to previous protections, nearly two-thirds of all Salvadoran immigrants will probably be legalized — a higher percentage than any other undocumented group. Immigration officials will start accepting applications in May.

For the first time, thousands of Salvadoran parents with children born in the United States, as well as adults of any age who arrived in the country before turning 17, will be free to drive without fear, work for formal wages and assert themselves when they feel they are mistreated by probing police or stingy bosses. Many also will be eligible to receive Social Security, Medicare and other federal benefits. “This will be transformative,” said Mark Lopez, director of Hispanic research at the Pew center in the District. “It’s not just about individuals getting temporary work permits and protection from deportation. It’s about their families and communities becoming more stable and being able to plan for the future.”

However, as Salvadoran diplomats and community leaders point out, the new relief does not resolve two issues that are crucial to many Salvadorans who have lived in the United States for years, and to smaller numbers of Hondurans and Guatemalans.

First, the president’s action does not allow beneficiaries to travel abroad, although many immigrants assumed that it would. Instead, they will need to obtain special “advance humanitarian parole” for trips such as family emergencies. In a community where many parents and children have been separated for years, the temptation to sneak home or arrange for children to come here illegally will remain strong.

“President Obama has lifted the sword of Damocles from the community. It is a great relief and a benefit to both our countries,” said Francisco Altschul, the Salvadoran ambassador to Washington. “But it is only a partial solution. If people can’t travel home and visit their families, then nothing has changed. The same pressures will be there.”

Second, the president’s action does not allow about 280,000 older Salvadorans who obtained temporary legal status as war refugees years ago to apply for permanent legal status. It also does not allow those who let such protection lapse and are now illegal to qualify for the deferred deportation benefit.

Salvadoran leaders here said that only Congress can make these changes and that they plan to seek relief on Capitol Hill for longtime refugees.

“So many Salvadorans with special status have made a life here, and over the years they have paid more than $1 billion in fees,” said Del. Ana Sol Gutierrez (D-Montgomery), a member of the Maryland legislature who is a Salvadoran immigrant. “But without Congress taking action, they will not get any relief.”

Counselors also warned that many people eligible to apply for deferred deportation may later be disqualified for a number of reasons. Those who have used false ID’s on rent or payroll records may not be able to prove a consistent work or residence history.

“People will have a lot to fear in gathering the required information about their pasts,” said Jorge Escobar, an official at CASA of Maryland, an immigrant advocacy group headquartered in Hyattsville. CASA is preparing to help thousands of Salvadorans and others apply. “For people who lived underground for so long, collecting documents will be the major issue that gets in the way,” he said.

Economically, the movement of tens of thousands of Salvadorans into the legal labor market should raise living standards for their families, both here and back home. Last year, according to El Salvador’s central bank, cash transfers from workers in the United States, known as remittances, totaled $3.5 billion and made up 16 percent of El Salvador’s gross domestic product.

And despite the anticipated rise in remittances, Salvadoran diplomats — like their counterparts in Honduras and Guatemala — insist that only massive foreign investment and aid will bring enough security and stability to their poor, crime-racked countries to stop people from fleeing north illegally.

After a surge of Central American minors crossed into the United States last summer, the Salvadoran government launched a campaign warning people not to go, but Altschul stressed that “we have to address the root causes of why people migrate. Otherwise, they will still leave.”

Advocates for the Salvadoran community suggested that before the embarrassing mass exodus of border kids — including about 3,000 who were later sent to relatives in the Washington area — Central American governments had been complacent about illegal immigration because it brought in remittances and eased domestic poverty. But in the United States, they said, Salvadoran immigrant and labor leaders revived a strain of activism from the Central American wars of the 1980s and ’90s, joining with Mexican immigrant groups to lead a push for immigration reform in Congress last year and executive action this year. In the Washington area, Salvadoran-dominated groups led most immigration rallies and protests.