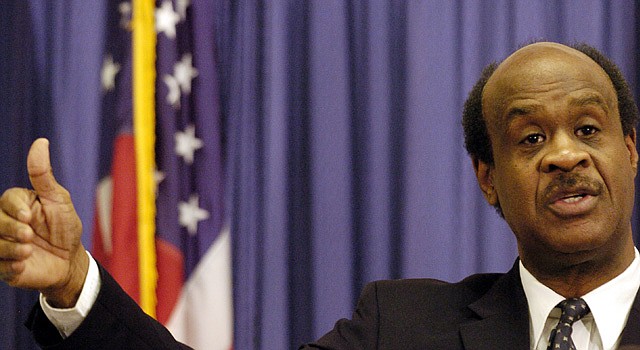 Montgomery County Executive Isiah Leggett doesn’t hold many news conferences, and when he does, they seldom feature personal reflections. But his meeting with reporters on Wednesday took a sharp revelatory turn as he described a recent encounter with police that could be called “politicking while black.”

On Nov. 3, as part of his election-eve ritual, Leggett, a Democrat who was running for a third term, placed campaign signs at about 20 polling locations. About 10:30 p.m., he said, he pulled up to the Good Hope Community Neighborhood Recreation Center, near his Burtonsville home in eastern Montgomery. He was alone — without his official security detail — and dressed casually in a sweater, jeans and baseball cap.

As he placed a sign beyond the 100-foot “no electioneering” perimeter, a Maryland-National Capital Park Police car pulled up. The community center is on county park land, patrolled by the police. Leggett said that a white officer emerged and began addressing him in what he called a loud and disrespectful tone.

“He jumps out and starts yelling at me. ‘What are you doing here? You can’t come here.’ He was screaming and yelling at the top of his voice about why I was there . . . in a very derogatory manner,” Leggett said.

Then another officer, a woman who is also white, got out of the car.

“She noticed the name [on the sign] and took a careful look at me,” Leggett said, and she apologized. “She said, ‘We didn’t know who you were,’ ” Leggett said. In an apparent attempt to excuse her partner, she said he lived in Howard County.

Leggett said he didn’t file a complaint about the incident.

Lt. Rick Pelicano, a Park Police spokesman, said Thursday that the department has no record of a police car stopping at the community center when Leggett said he was there. But Pelicano also said that anyone in the park after its 8 p.m. closing would have attracted police attention.

“They would have done the same thing to a white person,” Pelicano said, adding that the agency — which also covers Prince George’s County — rarely receives complaints of racial profiling.

Leggett related his story after being asked for his reaction to recent grand jury decisions in Ferguson, Mo., and New York, where officers who had fatal encounters with African American men were not indicted. Leggett focused on the Eric Garner case in New York, saying he found that grand jury’s decision “baffling.”

He went on to praise the performance of Montgomery County police and to express confidence that they would be held accountable in similar situations.

Leggett, who grew up in rural central Louisiana and was a civil rights activist in the 1960s at Southern University in Baton Rouge, said Montgomery has come a long way in race relations. During his first County Council election campaign in 1986, he purposely left his photograph off a brochure.

But “challenges associated with race have not been totally eliminated,” he said. That led to his election-eve story.

“My point is, I have witnessed what I consider to be behavior that is not respectful,” Leggett said. “So if it can happen to me as county executive, what do you think of the image of a young teenager who may not be as mature and react differently to that kind of conduct? Who is confused and frightened?”

It wasn’t the only time Leggett felt he had been racially profiled. In the mid-1990s, while a member of the County Council, he made a late-evening stop at a rental home he owned in the Briggs Chaney neighborhood. His tenant was behind on the rent, he said.

Leggett backed out and drove around the block, returning to make sure no one was there. The second time around, he was stopped by a Montgomery officer.

“The officer looked in [to Leggett’s car] and said, ‘Oh, Mr. Leggett — I just wanted to stop you to say ‘Hello.’

“If you believe that . . .” Leggett said, trailing off without completing the thought.