No way home for unauthorized immigrants 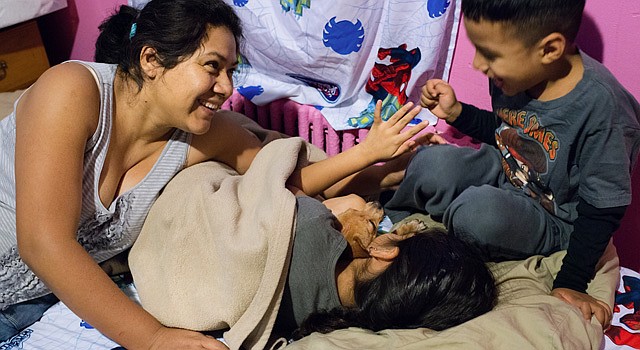 Rosa Pelaez, 32, left, laughs with two of her children, Briana, 6, center, and Edwin, 5, and the family Chihuahua as she puts them to bed. (Sarah L. Voisin/The Washington Post)

At rallies outside the White House promoting relief for undocumented immigrants this year, banners and chants demanded, “No more divided families.” Undocumented protesters declared that if President Obama granted them protection, their first priority would be to go home to visit parents or children they had not seen in years.

But many are now discovering that the president’s Nov. 20 action, while stopping deportations that take undocumented immigrant parents away from their children, does not allow families divided between the United States and their homelands to be reunited, except for brief emergency trips.

One of the most compelling arguments for broad immigration reform was family reunification. But the failure of Congress to pass reform legislation has led instead to piecemeal policies — such as Obama’s 2012 action protecting young “dreamers” from deportation and his new one sheltering mainly parents of U.S.-born children — that ease legal burdens but fail to address that fundamental yearning.

Now, hundreds of thousands of undocumented families who left children or parents behind are in a special bind. They may still be tempted to arrange illegal cross-border visits, but they have more to lose now if they get caught, because it would jeopardize their new legal status and their ability to support the children they have here.

“This will not reunite families,” said Andrea Rodriguez, a lawyer at the Central American Resource Center in the District, which has begun offering workshops explaining Obama’s latest action and preparing immigrants to apply. It is widely expected that even those who qualify will only be able to travel home with special one-time permission, usually granted for emergencies.

“People may no longer have to miss a parent’s funeral or hospitalization,” Rodriguez said. “But for those who have been separated for years from their parents or children, and simply want to reconnect with them, it is not going to be possible. There will still be that worry and stress.”

This realization has begun to dampen the mood of jubilant relief that flooded immigrant communities last month after Obama’s announcement, which will allow several million people with U.S.-born children to work and live here legally for the first time. Most of them have parents back home, and many left older children behind as well.

Rosa Pelaez, 32, an immigrant from Mexico who lives in the District, said she is thrilled that she and her husband, Juan Flores, who have four U.S.-born children, will probably qualify for three-year protection. After almost 15 years in the United States, both expect to be able to live and work legally for the first time, without fear of being caught and deported.

But Obama’s action will not grant Pelaez her dearest wish: to see her father again. Until this month, she was under the mistaken impression that the executive action would allow her to travel to Mexico, where she left home as a teenager and where her dad, now an ailing widower, lives alone in the same house.

“I know my father is lonely. All these years working here, I’ve helped him pay to put light and water in his house, but I have never been able to see him,” said Pelaez, 32. She held out a blurry snapshot of a gray-haired man, standing next to a cinder-block shack surrounded by banana plants. “Now they say I still can’t go visit him unless it’s for his funeral.”

Two years ago, when Obama announced a similar executive action granting temporary deportation relief to about 700,000 illegal immigrant youths, known as dreamers, the issue of family reunification was not as dire. Some dreamers grew up in the United States without their parents, but many came to the United States as children with older family members.

This time, though, many of the families who qualify for the president’s protection are the same kinds of families whose children, left behind in El Salvador or Honduras, surged across the U.S.-Mexico border this year after their parents — anxious to save them from gang violence or just longing to be with them — paid smugglers to bring them north.

So far, no one is predicting that Obama’s latest action will prompt a new wave of border arrivals, and immigrant advocates note that parents who qualify for his plan will have much more at stake if they attempt to travel illegally, including work permits, some health benefits and a possible path to permanent residency.

The government has not yet published the final rules for Obama’s plan, but immigration experts expect they will be almost identical to those issued with the 2012 executive action that established the “Deferred Action for Childhood Arrivals” program, or DACA.

Like other forms of temporary protection for illegal immigrants, DACA did not confer the right to travel. Under U.S. law, even those granted relief from deportation are still considered illegal, and they can only leave the country legally by applying for a one-time emergency travel document called “advance parole.” Immigration officials have full discretion whether to approve or deny such requests, and often they are denied.

Several immigrant parents who left their children back home, dismayed to learn that Obama’s latest action would not allow them to travel, said they would still consider having their children smuggled north. Isabel Cruz, 38, a Salvadoran restaurant worker in Maryland, said she worries constantly about her two sons back home, especially since the older one was recently beaten by gang members.

“If the new law won’t let us find a way to be together, maybe I will have to take the risk and start sending for them,” said Cruz, who has a younger child born in the United States. “It is not safe for them in my country.”

Others with children here to care for said they would rather remain separated from loved ones than risk the hazards of illegal travel. Maria Muñoz, 26, a dishwasher in the District, said she misses her parents in El Salvador but has built her plans firmly around her daughter, Andrea, 2, who was born in the United States. She expects to apply for deferred deportation in the spring.

“My greatest dream is to go home and see my family, but even if I get the chance, I would come right back,” said Muñoz, who has been in the United States for eight years. As she spoke, she tried to hold her squirming daughter while eating a plate of tacos in a Mexican cafe. “I want her to be a prepared person, to go to an American university,” Muñoz said. “In this life, you have to choose between the past and the future.”

According to instructions issued by U.S. Citizenship and Immigration Services for DACA recipients, travel requests may be granted for any of three purposes: humanitarian needs, such as medical treatment or a family funeral; educational opportunities, such as exchange programs; and employment requirements, such as attending conferences.

Applicants who meet the travel criteria must pay a fee of $360 and wait, often for weeks, while immigration officials decide whether to approve the trip. “Travel for vacation,” the instructions add dryly, “is not a valid basis for advance parole.”

Patrick Taurel, a lawyer with the American Immigration Council in the District, said his nonprofit agency has been urging immigration officials to broaden the definition of “humanitarian” travel to include family reunions. “To visit a close family member you haven’t seen in years, isn’t that a humanitarian purpose?” Taurel asked. “This is a very important and dear issue to a lot of people.”

Rodriguez, who conducted a workshop this week on how to apply for deportation relief, said that immigration officials have been granting more permissions lately for trips they deemed “important,” and that at least one DACA student was approved for a college exchange trip back to El Salvador. “It doesn’t hurt to try,” she said.

Citizenship and Immigration Services officials provided the current rules for advance parole but declined to comment on any plans to change those guidelines.

For Pelaez, the yearning to go home and take care of her ailing father in Mexico has been increasingly overshadowed by her responsibilities as the mother of three children in elementary school and a newborn, all U.S. citizens. Her husband, Flores, 40, a grounds¬keeper, has not seen his mother in 20 years, but he is focused on a different goal through Obama’s action: obtaining a work permit and finally asking for a raise.

In the couple’s tiny apartment in the District one night this week, a jumble of children and pets cavorted on several mattresses crammed into one room, while Pelaez kept a semblance of order. With 8-week-old Sebastian napping on her chest, she rummaged through an album of old family photos from Mexico, full of hammocks and chickens and barefoot kids.

“We were so poor back then. Life is much better here,” she said. Across the room, her two older sons huddled excitedly over an iPad, playing a race-car game and chattering away in English. Her daughter came in, wearing a smart plaid school uniform, and picked up the family cat. As Pelaez looked around the room, it was clear that she had already made her choice.