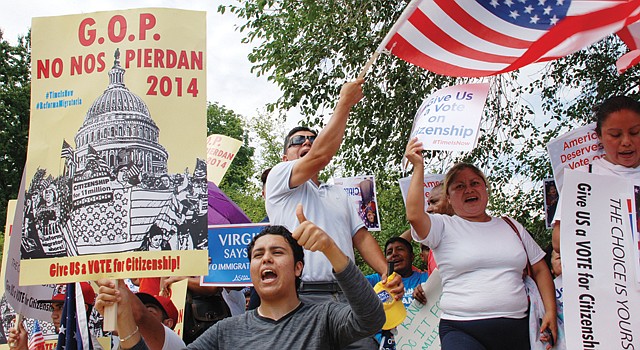 1. After two decades working with the Hispanic community, writing about Latino concerns, and listening to the human story, there is always a heart breaking common denominator: The story of people who convinced themselves that if they worked hard enough and achieved enough, they would be rewarded with citizenship. They thought that in this country you could earn it. Reality check: It is easier to “buy” US citizenship —millionaires, corporate executives, and show business stars— than to earn it —hard working immigrants, undocumented men and women in the US Army, children brought to this country illegally and who are now young adults of excellence full of American dreams.

3. Does a President who promised Hispanics his personal commitment on immigration reform deserve 75% of the Hispanic vote? Obama’s 120 words on immigration reform were “strategic,” according to advisors quoted by The Washington Post. Will this turn out to be a “strategic” nightmare when democratic candidates try to attract Hispanic voters in the midterm elections? The President who “won’t stand still” could at least suggest or “threaten” with an executive order on the issue of non-urgent deportations. The idea is to suspend deportations until a resolution has been reached on the immigration bill. Many think that if Congress does not act on the issue, it is on Obama’s power to stop deportations with the stroke of a pen. Such an executive power action by Obama would send a clear message: The president is acting without Congress, and the president will act unilaterally unless Congress sends him an immigration bill. An executive order is a presidential directive that carries the force of law. Such an action is part of the American democracy. Executive action to halt all deportations of undocumented immigrants who have not committed serious crimes it’d be politically consistent and within precedent.

4. Yes Mr. President, US immigrants and dozens of thousands of American families whose loved ones are documented or undocumented immigrants were repeating your words louder and louder: “Opportunity is who we are.” Too bad, Mr. President, that you were not talking about them.