A Nation of Laws, Principles & Immigrants 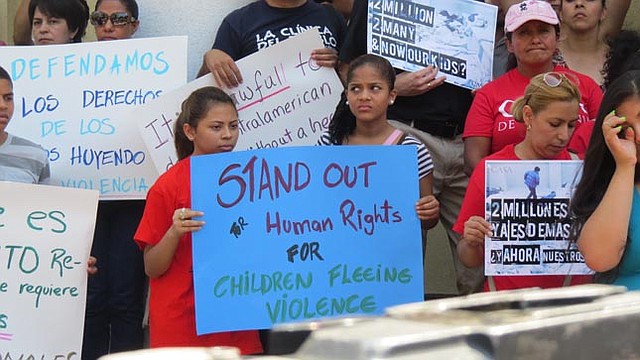 President Obama went to Texas and paid for the lunch of a family at a BBQ restaurant in Austin. The menu: three pounds of brisket, two pounds of ribs, a half-pound of sausage and a half-pound of turkey for a party of four. Total: $102.50, according to a New York Post report. Also, on June 9, he challenged Gov. Rick Perry to rally Republicans in support of a $3.7 billion emergency measure aimed at solving the humanitarian crisis at the Mexican border.

Perry asked Obama to visit the border, a call that Obama rejected. “This isn’t theater; this is a problem,” he said. “I’m not interested in photo-ops. I’m interested in solving a problem.” BUT #1: Obama is a leader facing one of the most wrenching humanitarian crisis of his administration and he is refusing to visit the cruel playground at the US southern border. #2: As a President and a Nobel Peace Prize recipient, Obama should be talking to the Border Patrol, visiting the conditions these migrant children are enduring, and showing the right measure of concern and interest beyond Washington politics. #3: Will his visit to the border be interpreted as a “photo-op”? Probably, but it would be much more meaningful and consequential than showing up at a BBQ restaurant in Austin.

The Obama administration predicts that 90,000 unaccompanied minors could be apprehended before the end of this fiscal year Sept 30, a more than three-fold increase over 2013. The new projection is said to include about 70,000 unaccompanied migrant children from Central America.

Homeland Security Secretary Jeh Johnson told the Senate Appropriations Committee that immigration agencies will begin to run out of money in mid-August without the aggregation of funds from Congress. That’s why some politicians are now trying to barter with the crisis in order to change the laws protecting the migrant children. Johnson warns that the 2008 law “reflects fundamental values and commitments of this country that we should continue to adhere to.” Indeed we are a nation of laws, principles, and immigrants. But Johnson has the wrong recipie to solve the crisis: “People in Central America need to see illegal migrants coming back,” Johnson said. “We have to return people. They need to see people coming back.” Wrong: Migrants have lost money, lives, and dreams, but they keep heading north because they come from dysfunctional countries where the US interests are focused on commercial and/or geopolitical issues —countries where the welfare of their population is secondary.

The migrant children crisis is heart breaking, but there are no easy, fast solutions. Let’s start with comprehensive immigration reform. All the Speaker of the House has to do is allow the Will of Congress to be enacted. And, all the President has to do is refuse to enforce a legal regime which emphasizes deportations.

If there’s a will, there’s a way. If you will the end, you must will the means, they don’t just appear. To eat soup, use a spoon, not a fork.