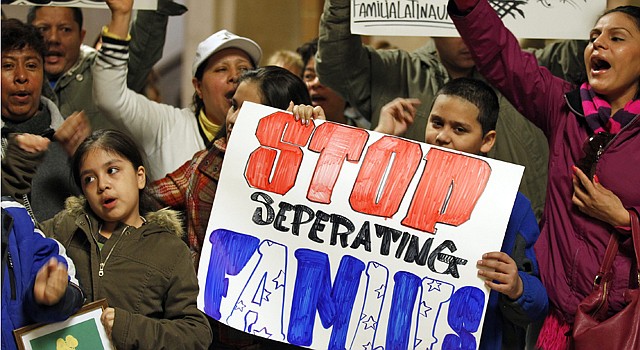 A landscape: Within the 2,000-mile border between the US and Mexico, the Rio Grande Valley is the place where more unaccompanied migrant children cross. The number of kids caught has surged to 52,000 so far this fiscal year.

A law: Under the Trafficking Victims Protection Reauthorisation Act of 2008, the children must be given a court hearing before they are either deported or allowed to stay. While waiting for a hearing, they go to live with a relative already in the United States.

A father: In Fairfax, VA, José Benavides told El Tiempo Latino’s Milagros Meléndez Vela that he was aware of the danger his teenage son would endure when he paid a coyote in 2012 to smuggle his son through the Rio Grande Valley. Benavides said that the maras (gangs) tried to kill his son when he refused to collaborate with them. The family was hiding him in La Union, El Salvador. Once Benavides’ son was caught by the Border Patrol, he went to Texas and brought him to their home in Virginia. His son will have a court hearing in 2015, said Benavides.

A girl: Cindy Monge lives in Silver Spring, Maryland. This 18-year-old young woman of Guatemalan origin crossed the border when she was 11. She vividly remembers her fears. Today she is protected under DACA, “but it is very difficult to get my papers,”she says.

A boy: René crossed when he was 17. “They didn’t catch me. I suffered hunger and my life was at risk but I made it,” said René, a Salvadorean undocumented immigrant living in Virginia.

Politics: Texan senator Ted Cruz said that the crisis is the result of President Obama’s policies. And John Boehner, the Speaker of the Republican-controlled House of Representatives, has called for the National Guard to be sent to the border. Republican voices are calling for more spending on border security when the US-Mexico border is registering fewer illegal crossings than ever.

The issue: Current Immigration Law and Regulatory Regime must be re-structured to include border security, status of unauthorized residents currently in-country, and a post-restructuring uniform rule of naturalization. The Speaker should lead, and the House should vote on the Immigration Reform Bill passed by the Senate. The President should grab the bull by the horns, stand on the bully pulpit, and create the conditions for our politicians to cope with the fear of their personal risk to leadership.

The roots of the problem: The region is host to nations with governments unable to provide a safe and decent living to an important segment of their citizens. In that regard, Rubén Zamora, the ambassador of El Salvador to the United States, wrote in an op-ed published by The Miami Herald that his country is working to offer “more job opportunities to the vast majority of Salvadorans, less social and economic inequity and a safe environment for our children.” These kids, says Zamora, “are not only the children of our countries. They are the children of our region.”