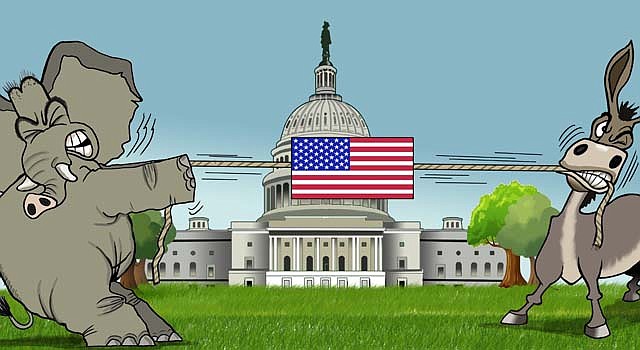 Tug of war is a sport that directly pits two teams against each other in a test of strength. In politics, tug of war translates as confrontation, bickering, and threatening to block must-pass spending bills to keep the government running.

As lawmakers returned to Washington after midterm elections in which Republicans beat Democrats with a powerful thrust and retook the Senate, the presidential siren for an executive action on immigration echoes again in the corridors of Congress. And many Republicans are nervous. Some in the Senate have clearly said that they will use their power —meaning deny funding— in order to block Obama from taking unilateral action to protect millions of undocumented immigrants from deportation. “Congress appropriates the money,” Senator Jeff Sessions of Alabama told reporters. “If Congress disapproves of the president providing ID cards for people who’ve been in the country illegally, then it should not appropriate money to fund it.”

Republicans don’t want any spending bill during the lame duck session that could help implement immigration policy. The solution for them could be a short-term bill funding Government and then come back next year when they will be in control of Congress and start what some call “the defunding of immigration-related activities.” Democrats would be happy to see a Republican majority Congress openly hostile to the immigration issue. But after some bickering and threats of another Government shutdown, it is more likely that we will witness the passage of a conservative immigration reform bill.

What we can expect ahead will not be a political tug of war any more, rather a tense political positioning like runners huddled together crowding the starting line before a marathon. Remember the coming presidential elections in 2016?

They are understandable, the Republican concerns of President Obama’s announcement —another one— about acting unilaterally on immigration. Unlike the average Hispanic voter, Republicans believe what the President has said.

By the way, isn’t it paradoxical that the Deporter in Chief —the President who holds the record for most deportations under his watch— has defiantly pledged to act on his own to reduce deportations?

So, what can we expect from Obama’s executive immigration menu?

Question: Will there be funds to support these measures?