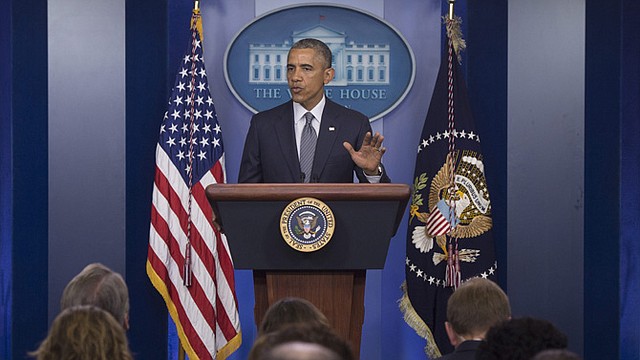 Question: What do six Republican and five Democratic presidents have in common? Answer: All of them delivered executive orders of temporary deportation relief. From 1956 to 2014, Eisenhower, Kennedy, Johnson, Nixon, Ford, Carter, Reagan, Bush Sr., Clinton, Bush Jr., and now Obama have provided parole by executive action to millions of undocumented people —Hungarians, Cubans, Chinese, Vietnamese, Ethiopians, Soviet refugees, Central Americans… In 1987, President Reagan stopped the deportation of Nicaraguans and granted them work authorization — legislation was pending. Ultimately, the Nicaraguan Adjustment and Central American Relief Act passed. Under Reagan’s watch, the INS was also authorized to defer deportation proceedings for “compelling or humanitarian factors.” Between 1989, another Republican President —Bush Sr.— issued an executive directive of deferred action for Chinese nationals following the Tiananmen Square crisis. In 1990, Bush Sr. deferred the deportation of unauthorized spouses and children of individuals legalized under Reagan’s 1986 Immigration Reform and Control Act. Bush’s Immigration Commissioner issued a blanket “Family Fairness” policy and dropped the “compelling or humanitarian factors” requirement from the prior executive order. President Bush Sr. —a Republican— protected 40% of the then undocumented population from deportation. Legislation had passed the Senate, but not the House, providing similar relief. In 1992, the Bush Administration granted Deferred Enforced Departure (DED) to certain El Salvadorans because their statutory TPS grant expired. President Clinton subsequently extended the DED grant. In 1998, the Clinton Administration suspended deportations to El Salvador, Guatemala, Honduras, and Nicaragua in response to Hurricane Mitch. In 2002, Bush Jr. issued an executive order of expedited naturalization for green card holders who enlisted in the military. In 2005, Bush Jr. provided deferred action for foreign students affected by Hurricane Katrina. At a time when Congress was considering legislation, Bush Jr. also suspended employer verification rules. In 2012, the Obama administration issued the Deferred Action for Childhood Arrivals (DACA). Since the DREAM Act has not passed, DACA provides a two-year renewable reprieve from deportation —and an option of work authorization— for those meeting certain criteria.

A report published in October by the American Immigration Council —which I tried to summarize here— stated that presidential decisions to act on immigration have “common characteristics.” Obama has issued “Family-based actions” like Eisenhower or Carter before him, and “actions while legislation was pending” like Eisenhower, Kennedy, Nixon or Clinton. Whatever the extent of Obama’s new “actions” —expected to be announced after this column goes to print— nothing will justify the President’s deportation record nor the fact that Republican leadership has failed the country.

Here is my message for our people in Congress: Pick yourselves up, dust your narrow minded ideologies and racial anxieties off, start all over again, and pass comprehensive immigration legislation in 2015 that makes sense in this country of immigrants. Tomorrow’s history is today’s immigration policy.