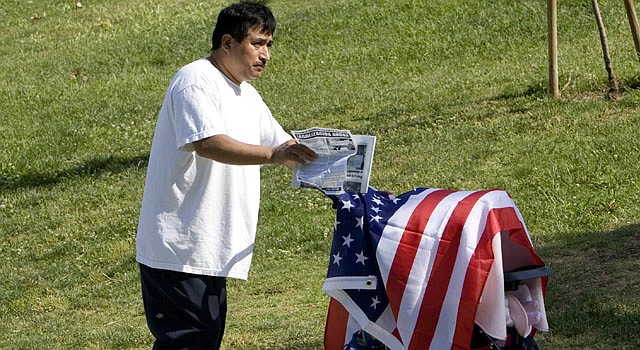 Hispanics are an essential part of our present —17% of the population, huge economic power and growing voting influence— but we need not to forget that —as historian Felipe Fernández-Armesto puts it— “Hispanics belong in the entire story of the country —as part of its origins and part of every important episode in its unfolding.”

Fernández-Armesto published early this year the book “Our America —A Hispanic History of the United States” where the Professor at the University of Notre Dame creates an absorbing narrative stating the obvious: “The Hispanic United States encompasses more than migrants. Hispanics preceded the United States in what is now national territory. Their presence has been a longer part of the history of the land than that of any other intruders from across the Atlantic, including Anglo-Americans.”

And then there is the US Hispanic reality as portrayed by American media: Immigrants with legal status issues. That’s who we are.

Last year, this column had “Happy Hostage Heritage” as a title. And included many questions: We have too many Hispanic leaders and a clamorous lack of Hispanic leadership —where are those voices that fill up the hearts and minds of a community and make that community feel full of purpose? Hispanics are allowing others to define them —be it white, old, grumpy men on TV; some politicians in Congress; or Hispanic activists: Why are Hispanics always portrayed as “illegals,” or a community of underachievers? Why don’t Hispanics exist in media –besides the sorrowful quota of blood, sweat, and tears allocated to us on TV or Hollywood? Why isn’t a Hispanic population of 50 million people —all of who have American passports or legal residence statuses— ever part of an intelligent conversation? When “white” broadcasters defame the Hispanic community, why does it not trigger any consequences? Why is our own Hispanic media full of stereotypes, and why does it constantly attack the intelligence of the Hispanic audience? So many questions…

I do understand that the idea of Hispanic Heritage Month is to recognize the Hispanic roots of immigrants who made it in America. But, let me check a history book: those are not Hispanic roots, those are American roots. That is the way Hispanics became US Americans. Therefore, we are the gringos. How is it that a small group of Pilgrims —100 British religious renegades— became quintessential Americans while we—Spanish speakers, explorers, founders of cities and catalysts of the new American culture— end up being “the other,” the foreigner, the immigrant?

And then there is PBS producer Ken Burns ignoring or deleting the role of Hispanics in his documentaries —from the American Civil War, the World War II documentary or the current Roosevelt production. Burns is a great producer who —as others in media today— send us a disturbing message: “Hispanics? No, gracias.”