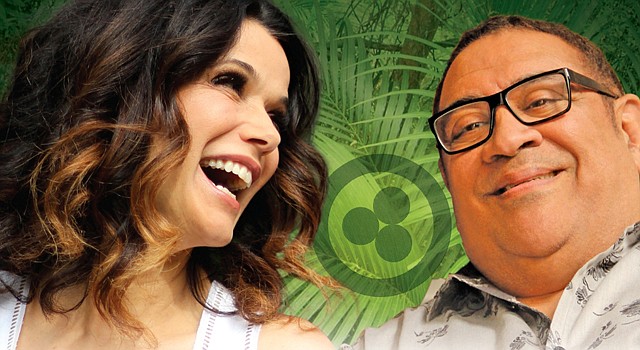 “Talisman” featuring Sammy Figueroa and Glaucia Nasser, is a perfect balance between the exciting Latin percussion of double Grammy nominee and renowned musician Sammy Figueroa (Miles Davis, Sonny Rollins, David Bowie, Mariah Carey and many more) and Brazilian singer Glaucia Nasser. "Like peanut butter and chocolate" this combination of Brazilian song and Latin percussion comes out as a surprising and tasty combination.

The album, which was produced by famed Latin record producer Rachel Faro, will be out on September 9th on Savant Records (High Note). Publicity will be supported by RockPaperScissors, and Michael Hurzon will be promoting it to Jazz Radio.

Glaucia’s past concerts promoted by Miami’s WDNA 88.9FM radio station, enchanted Sammy, who decided to start a unique and unprecedented partnership with the singer, which has resulted in this exciting album. This work also carries an important symbolism since it has received the backing of the legendary producer and engineer Roy Cicala, shortly before he passed away. Roy, a master of sound with ten platinum albums to , and who has worked with John Lennon, Jimi Hendrix, Aretha Franklin, Frank Sinatra and Bruce Springsteen, became interested in the project. He offered his studio and his cooperation for the recording.

His other group, Sammy Figueroa and his Latin Jazz Explosion, is one of the most exciting in jazz today. Known for their exciting performances, enhanced by Sammy’s ebullient humor , the band has recorded three albums, with two of them nominated for the Grammy for Best Latin Jazz Album.

Glaucia has garnered critical praise from notable names of Brazilian music such as Nelson Motta, Roberto Menescal, and Ivan Lins. Glaucia’s four previous albums have been extremely well received by the media and fans alike. Her extensive concerts and world tours have built a fantastic following.