‘He was not afraid.’ The funeral of Benjamin C. Bradlee 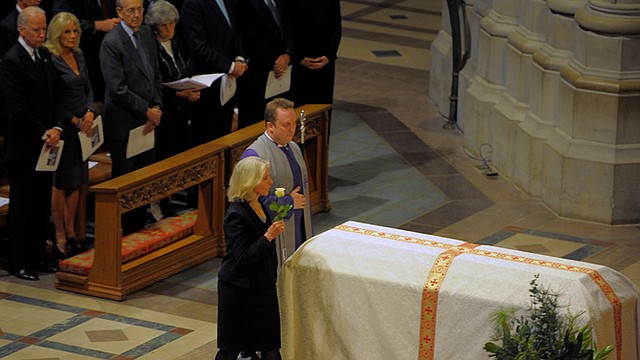 A sea of mourners gathered at the National Cathedral in Washington, D.C., to remember Benjamin C. Bradlee, the editor who guided The Washington Post’s newsroom for nearly a quarter of a century.

The funeral Wednesday morning was an opportunity for a long list of colleagues, friends, politicians and luminaries to remember Bradlee as a pivotal force in American journalism, a man they said inspired awe in his employees and showed no fear during a career spent searching for the truth. But amid the famous names and the security details, it was also a chance for his loved ones to say goodbye.

“My father was the happiest man I ever met,” Quinn Bradlee, his youngest son, said during emotional remarks that were followed by people dabbing their eyes across the cathedral. “Everyone who ever met him wanted more of him. They wanted to be his best friend. They wanted to please him. They all reacted the same way.”

The famous newspaperman was recalled for his personality and exploits, but he was also exceptionally welcoming and kind, Quinn said.

“He lived, he loved, he laughed,” he said. “We should all strive to take this path.”

“We knew somebody much better than his very large reputation,” Donald Graham, the first speaker and former publisher of The Post, said during his remarks. “Even braver, even smarter, much more fun.”

“He had his faults, and if my mother Katharine Graham was still here, believe me, she could go on a very long time about those,” Graham continued. “But she literally wrote the book about how great Ben Bradlee was, and it was a very long book.”

Ben Bradlee Jr., wearing a tie and shirt that belonged to his namesake, recalled his father as someone who naturally used off-color language and did not dwell extensively on mistakes and missteps. “He was not introspective in the least,” Bradlee recalled, but he was someone who encouraged others to have fun.

Other speakers at the service for Bradlee, who died last week at 93, included Carl Bernstein and Bob Woodward, the reporters who broke the Watergate story under Bradlee; Washington Post editors and writers; andTom Brokaw of NBC News.

“He was not afraid,” Carl Bernstein said during his remarks. He recalled a time when he and Bob Woodward, reporting on the Watergate story, had to ask Bradlee about comments made by then-Attorney General John Mitchell. As Bernstein recalled, Bradlee told the young reporters that if their reporting was correct, if they had identified themselves, that was all that mattered.

“He pulled off being Bradlee because he wasn’t afraid,” Bernstein said. “Of presidents, of polio, of political correctness, of publishing the Pentagon Papers…of making mistakes.”

Woodward, speaking after Bernstein, called Bradlee “a journalistic warrior” who prowled the newsroom searching for hidden truths, gossip and news. He said that the people who worked under and with Bradlee loved him. “In almost every discussion or encounter with Ben, no matter how fleeting, he made you feel better about yourself,” Woodward said. “He made you want to be better.”

The service was open to the public, so members of the community filled the main section of the cathedral along with a roster of bold-faced names including Jeff Bezos, owner of The Post, Vice President Biden and Jill Biden, Secretary of State John Kerry, Supreme Court Justice Stephen Breyer and Sen. Patrick Leahy.

The room was filled with journalists who had worked for Bradlee years ago and those who only knew his legend, as new media gathered alongside old media. At the cathedral’s entrance before the service, two of Bradlee’s successors at The Post – Marcus Brauchli and Leonard Downie — had gathered together. Arthur Sulzberger Jr. and Dean Baquet, publisher and executive editor of the New York Times, respectively, were joined by former Washington Post publisher Katharine Weymouth.

“He was larger than life,” Weymouth, a pallbearer, said. His death is “the end of an era and the beginning of a new era.”

But among those who spoke to the assembled crowd, there were calls to remember Bradlee for more than his personality and history. They instead said that people should look to the work Bradlee did and championed for guidance.

“Future journalists should ask, ‘What would Ben do?’” David Ignatius, a columnist for The Post, said during his remarks.

Outside, mourners had shared space on sidewalks with packs of St. Albans’ students in school uniforms, the children mixed with former Defense Secretary Donald Rumseld and journalist Ted Koppel.

Inside, people who had worked with Bradlee recalled their experiences. Peter Perl, a former Post editor and reporter, recalled his interview with Bradlee.

“Ben asked me, ‘So why should we hire you?’” Perl said Wednesday. “I said, ‘I’m a really good softball player and I can really help the Post’s team.’ Ben laughed at that. I got the job.”

Elizabeth Drew, the veteran political journalist and the preeminent chronicler of Watergate who did not work for Bradlee, looked around at the hundreds of mourners, impressed by the turnout.

“Some are here because it’s to be seen,” she said. “But for most, it’s a real affection. A lot of friendships that go way back. Look at the range of people! It’s just amazing!”

Cathy Horyn, who recently retired as the New York Times’s longtime fashion critic, recalled Wednesday what happened when he hired her in August 1990 after a breakfast meeting. “I was terrified,” she said. “I was very impressed and awed. I was babbling about fashion, and finally Ben said, ‘I know nothing about fashion. I always counted on Nina Hyde to tell me what I needed to know, and I want to count on you to do that for me.”

There were also stories of how Bradlee would stand up for his reporters. John Harris, a former Post reporter who co-founded Politico, recalled a time he wrote a profile of someone in suburban Maryland who was unhappy at being labeled an irresponsible firebrand.

“He wrote a five-page letter to Ben,” Harris said. “He replied with two sentences: ‘You aren’t serious. If there aren’t some people who’d consider you an irresponsible firebrand, I’ll eat that piece by John Harris.’ It was the best thing a 22-year-old reporter could imagine.”