Why is it so important? 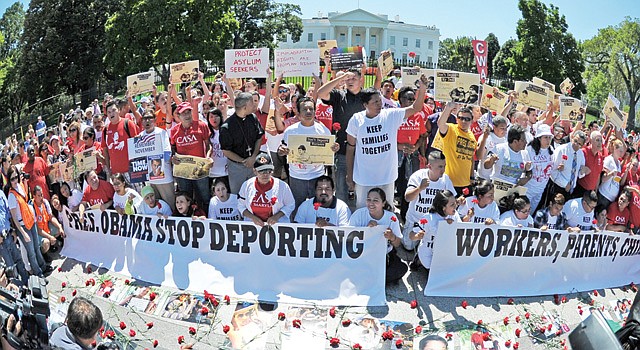 Some readers have asked me why El Tiempo Latino —a publication owned by The Washington Post— dedicates so much ink to the immigration issue. Here we go again:

1. Immigration should be a non partisan issue since it is an engine for economic prosperity. The non-partisan Congressional Budget Office estimated that the Immigration reform bill passed by the Senate in June of 2013 would reduce the US fiscal deficit by $197 billion over the next ten years. The Social Security Administration said that this bill, if it becomes law, would help add $276 billion in revenue over the next 10 years while costing only $33 billion. Even a conservative politician such as Jeb Bush warns us that “the failure to maintain a reliable pipeline for low-skilled labor —or worse yet, efforts to drive such workers out of the country—thus bodes disastrous economic consequences…” In his 2013 book —“Immigration Wars”— Bush mentions the billions of dollars in annual gross domestic product lost in Alabama when the state clamped down on illegal immigration.

2. English language media coverage of the issue tends to be timid when not loaded with the atmosphere of an alien invasion. The subtext is simple: Immigrants are a) Latinos b) Undesirable foreigners, and c) “Illegals” (a less than human category). And all of the above, beings with no links to the American people. If thousands of people demonstrate in front of the White House, why do English language media ignore it or minimize it? Why is the immigration issue placed on the sidelines?

3. Anti-Latino immigration rhetoric does not change, but immigration does. Most new immigrants are not Latinos and most Latinos are not immigrants. Asia surpassed Latin America as the dominant source of new immigrants: 45% vs. 34% in 2012. Also, most US Hispanics are either legal residents or US citizens —millions of Americans whose stories are not being told by news organizations. However, the immigration drama hits American home: A poll conducted in 2013 found that 85% of undocumented immigrants have a family member who is a U.S. citizen. Among these, 62% have at least one U.S. born child, and 29% have a spouse who is a U.S. citizen or legal permanent resident.

4. The Supreme Court declared that immigration policy shapes our destiny, expressly stating that our history “is in part made by the stories, talents, and lasting contributions of those who crossed oceans and deserts to come here.” Tomorrow’s history is today’s immigration policy—Since The GOP is trying to hit the immigration piñata by sending to Congress a bunch of politicians whose strategy is to look the other way while blindfolded, President Obama must act now.

5. Leadership is easy to articulate and difficult to implement. In this case, the leadership of one needs to be carried on by the civic engagement of many. Immigration Reform demonstrations in front of the White House —although unnoticed by some media— may help the future Hispanic voter.