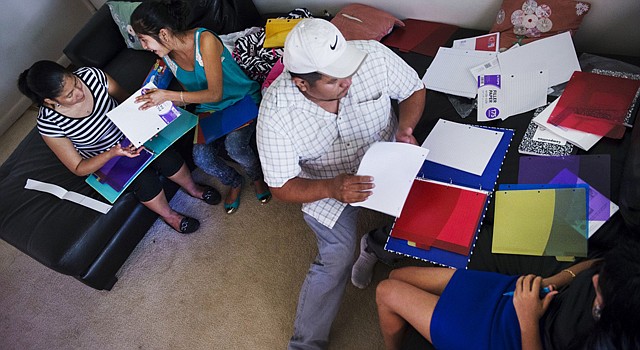 All summer, Central American children caught at the U.S.-Mexico border have been trickling into the Washington area, sent to live with relatives in Latino communities. Now, they are descending en masse on the region’s public schools, bringing an array of problems that school officials are scrambling to address.

Ripped from distant worlds, most of the new students speak no English, and some are psychologically scarred from abuse by gangs or smugglers.

Ripped from distant worlds, most of the new students speak no English, and some are psychologically scarred from abuse by gangs or smugglers. Reunited with parents or other relatives they barely know, and still grieving for family and friends back home, they may feel depressed and resentful.

“Some of these kids arrive feeling very angry,” said Rina Chavez, a counselor with the Montgomery County schools. “After years of living with their grandparents, suddenly here they are with mom and a new stepdad and two younger siblings. Then they are expected in a heartbeat to sit down and learn, but they may not be ready.

“At first, some even refuse to learn English.”

Of the roughly 37,000 border children released to parents or other sponsors since January, the Washington area has absorbed one of the largest contingents in the nation. Fairfax County has received 1,023, followed by Prince George’s County with 960 and Montgomery County with 816. Only Los Angeles, Miami, two New York counties and one in Texas have received more, according to federal statistics. All of the children will face eventual hearings on their immigration status.

Because all three regional school systems already serve large numbers of Spanish-speaking students, the schools are equipped to handle some of the newcomers’ needs, such as testing for English skills and academic placement. Also in place are outreach programs to encourage immigrant parents to participate in school activities and to help them sort out conflicts after long family separations.

“We have been integrating these kids into the system for years,” said Chrisandra Richardson, who administers English for Speakers of Other Languages programs in Montgomery schools. Last year, the county had 19,000 such students, and the border surge has added about 800 more. “It’s not a drop in the bucket,” she said, “but it’s what we do.”

John Torre, a Fairfax schools spokesman, said non-native English speakers were already the fastest-growing segment of students, with more than 6,000 enrolled since 2011. “This is not a new phenomenon for us,” he said.

Yet even for schools used to integrating Hispanic immigrants, the unusually large number of those enrolling at once — many with social and emotional needs — is straining the system’s capacity for counseling and mental-health therapy.

Officials at Mary’s Center, a nonprofit health agency that provides 12 schools in the District and Maryland with mental-health therapists, said they have been swamped in the past two weeks with school referrals.

“What’s different is the sheer volume. There’s been a huge influx of kids with a plethora of issues,” said Kara Lowinger, who directs the center’s therapy program. “They come with a tremendous amount of trauma, and they feel like they’re living with strangers.”

While several school counselors and therapists described a variety of problems they have seen in newly arrived children, they said confidentiality rules barred them from discussing individual cases.

Chavez said she had heard numerous stories about violent drug gangs kidnapping children and their smugglers as they made their way across Mexico. Several counselors said some teenage girls had been sexually assaulted en route or had previously been abused by relatives.

Many troubled children have been reluctant to speak about their past experiences, making it difficult for even Spanish-speaking therapists to reach them in a few short meetings. Chavez said she urged the children to develop “coping skills,” such as drawing pictures for younger ones and keeping journals for older ones.

Lowinger said such children might “withdraw and isolate themselves” in class. “The main thing we try to do is offer a safe space where they can begin to open up and express what they feel,” she said.

Diana Sosa, a school social worker in Herndon, said Fairfax schools have established mentoring programs and ties with a network of ­churches, businesses and social agencies to supplement staff services for immigrant children who need emotional or psychological support.

But she also noted that local Latino gangs often prey on new students who seem lonely or alienated — much as they would do in Central America.

“These kids have so much on their minds. It makes them very vulnerable,” Sosa said. “We try to find them support and mentors. If they don’t get assimilated and learn English and begin feeling like they belong, they are much more apt to be recruited.”

One reason schools must shoulder these burdens is that the children may not feel comfortable confiding in parents or relatives who barely know them after years apart and who may have high expectations about their ability to adapt and succeed here.

And even for young people who have grown up amid violence and poverty, counselors say, it is a shock to be wrenched away from routines, friends, and the relatives who raised them.

Three months ago, teenagers Marlen and Mircy Rac Roque were living with their grandparents in Guatemala. They had not seen their father, Angel Rac, a construction contractor in Alexandria, in eight years; their mother, Silvia Roque, left to join him four years ago.

In May, both girls finished the school year, and Marlen celebrated her “Sweet 15” birthday at a formal ball, posing like a princess in a lacy lavender gown. Neither she nor Mircy, 13, had any idea what was coming.

Angel, whose business in Guatemala had once been threatened by gangs, feared that they would begin to harass his adolescent daughters, so he arranged to have the girls brought to the U.S. border. On June 11, they were put on a bus, carrying only water and food. After a short stint in U.S. federal custody, they were flown to Virginia.

They have spent the weeks since in a small apartment, watching Spanish-language TV and getting used to being a family again. One weekend, Angel took them to the beach, but they complained that the water was too cold to swim.

Last week, as the girls prepared to start school in Alexandria, Angel took them shopping for supplies. At home, he carefully wrote their names on two stacks of notebooks and binders. Mircy was glued to the TV. Marlen sat silently on a sofa, filing her nails. Their mother brought out some photos from the Sweet 15 party, and Marlen smiled faintly.

Their father, holding up the newly labeled supplies, grinned happily.

“This is what we dreamed and worked for all these years,” he said. “I haven’t seen my girls since they were babies. Now they are finally here, they will study hard, and they will start a new life.”