Schools move toward ‘Bring Your Own Device’ policies

to boost student tech use 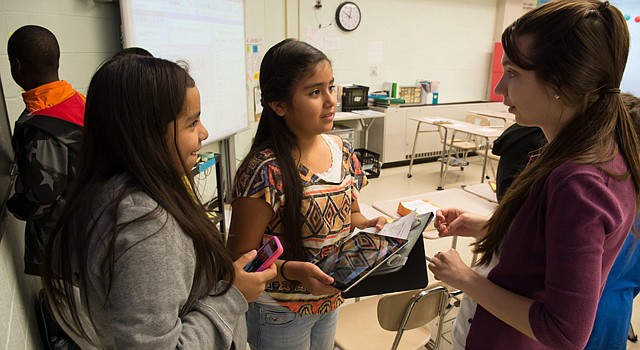 Katie Martinez, left, and Genesis Delcid talk with their teacher, Ginger Berry, about their project which requires them to use their personal smartphone cameras during Project Success class at Argyle Middle School. (Kate Patterson/For The Washington Post)

His iPhone is on his desk, out in the open, and Joshua Perez’s teacher does not take it away. Instead, she asks the eighth-grader and his classmates in honors geometry at Argyle Magnet Middle School to Google the words “vertex form parabola.”

In seconds, Joshua finds what he needs for the day’s lesson and homework. “It’s way better and faster than looking it up in a textbook,” he says.

The 13-year-old’s enthusiasm is matched in other Montgomery County classrooms as educators take their first steps into a practice known as “BYOD”: bring your own device.

The idea of allowing students to use their own technology in schools to enhance academic instruction is a significant departure from the cellphone bans of old. But it has increased in a number of school systems, including those in Fairfax and Prince William counties, as educators look for ways to embrace the digital world.

In Fairfax, where BYOD began in 2011, Maribeth Luftglass, assistant superintendent for information technology, points out that students have carried devices in their backpacks for years. “It just wasn’t necessarily official,” she said. Part of the changed thinking, she said, has been to “acknowledge what was happening and embrace it.”

Such approaches come as many school systems are investing heavily in laptops and tablets, with an eye toward one-to-one computing, which provides a device to each student. But some districts find that impractical, and in Montgomery, school leaders are taking a blended approach that they say is more affordable and sustainable: supporting BYOD practices as they also buy thousands of Chromebooks and tablets.

Montgomery recently adopted a technology initiative that aims to provide 40,000 computing devices to students this school year, the first phase of a plan to bring 100,000 laptops and tablets into schools by 2017-18.

Montgomery’s chief technology officer, Sherwin Collette, said school leaders are revising regulations for mobile devices and drafting guidelines for responsible use in schools. The schools plan to engage their communities on BYOD practices, and there is a ballpark goal of formalizing the practice in Montgomery when the second semester begins in January.

But in some places, there are signs of change right now.

Argyle Middle, with its mission as a digital design and development magnet school, is among the early adopters. BYOD is now common in its independent-reading period and on the rise in classrooms.

“It’s beginning, but we have momentum,” Principal Robert Dodd said. “It’s moving toward a place where it’s going to be standard operating procedure for learning, done in a strategic way.”

Dodd said support has been strong among teachers, a number of whom are millennials. “They’re comfortable with technology in their own learning, and that is trickling down to being able to use technology effectively for their students’ learning,” he said.

Teacher Casey Siddons worked with his sixth-graders on character development related to the novels “Maniac Magee” and “Tuck Everlasting” on a recent school day. He told students they could use smartphones to take photos that illustrate character traits and actions. Students buzzed with excitement.

Upstairs, science teacher Grace Romanelli’s class was working in small groups with their smartphones — so everybody didn’t need one — as they created videos or picture collages that describe a microscope’s parts and how it works.

Romanelli said parents were receptive at a recent back-to-school night, when she described BYOD and asked them to sign permission slips. “There were a lot of wide eyes and nods and oohs and aahs,” she said. “They were definitely interested.”

But as the change gains attention, many parents have questions.

Frances Frost, president of the county’s council of PTAs, said she wonders how the change will work and how teachers will control the way students use technology while in the classroom. She is concerned about the devices becoming a classroom distraction and wonders how students without devices or data plans will keep up.

Montgomery school officials said the county’s plan to purchase tens of thousands of devices will minimize differences in what students own or bring to school. They also said that BYOD is classroom-based and that teachers are sensitive to issues of equity.

Students are accustomed to working in groups and sharing devices, Dodd said, adding that “teachers are strategic about filling the gap when kids don’t have their own technology.”

Around the Washington region, some school systems have not adopted the practice, including D.C.’s public schools.

Loudoun County plans to unveil a plan during the next few months. Arlington, which has a plan to provide a device to every student by 2017, also has piloted BYOD at some schools.

Other school systems have visited Fairfax to observe its approach, Luftglass said. She said Fairfax has not seen major problems. “It adds to the technological resources available in our classrooms,” she said.

In Prince William County, this school year marks the third for BYOD, and its use has been on the rise, said A.J. Phillips, supervisor of instructional technology services. The first year, high schools, for example, had an average of 45 active devices in use at any given time during the school day, and last year that average rose to 534.

“Every year I’ve seen an increase in the number of devices,” she said. Use varies by school and teacher, she said. “Like any tool in the classroom, some teachers are going to embrace it and some are not.”