If a presidential run were a movie... 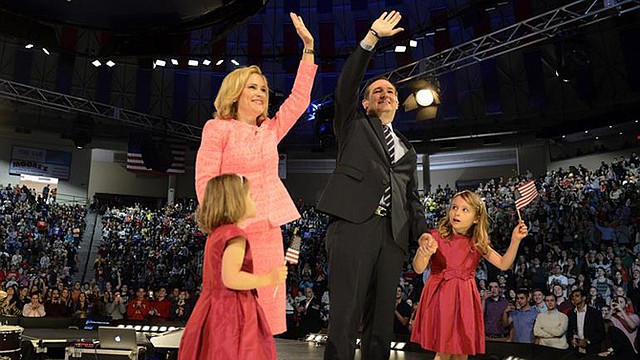 By Robert Costa and Philip Rucker

If a presidential run were a movie, the campaign announcement would be the red-carpet premiere — a highly orchestrated, old-school ritual infused with ego and bathed in klieg lights.

On Tuesday, Republican Sen. Rand Paul will begin a classic launch: a speech in a hotel ballroom on his home turf of Kentucky, followed by a fly-around tour of early primary and caucus states.

Next week, it’s Marco Rubio’s turn. The 43-year-old senator from Florida and charismatic son of immigrants plans to declare himself a GOP candidate for president on April 13 at Miami’s iconic Freedom Tower, which served as the first stop for Cuban exiles, before an enthusiastic crowd that embodies America’s ethnic melange.

More than a dozen other likely candidates, including Democrat Hillary Rodham Clinton, are brainstorming how to create their own vivid and memorable kickoffs in coming weeks. The act of an announcement is rarely a surprise, but what a candidate says — and where and how they choose to say it — offer important clues to who they are, what kind of president they aspire to be and how they think they can win.

More than perhaps any other occasion, launch events are under the complete control of the campaign, and a strong start can do wonders in propelling a candidate in a positive direction. When he became the first official 2016 candidate last month, Sen. Ted Cruz (R-Tex.) spoke in the round to thousands of young Christians at Liberty University — encapsulating his intended campaign theme and his life story in a single event. He soon vaulted to the upper tier of the GOP race.

For his 2012 campaign announcement along the Hudson River, former Utah governor Jon Huntsman Jr. and his handsome family strolled across a lawn like modern-day Camelot before he gave his speech, with the Statue of Liberty as his backdrop. But the audience on that windy morning had more journalists than cheering supporters, while the noise of airplane engines and a boat horn provided awkward interruptions. The episode became a metaphor for Huntsman’s ill-fated campaign.

“Boy, where to begin?” Huntsman said with a chuckle, recalling that day during an interview last week. “You never get a second chance to make a first impression, which is why I was disappointed with my own.”

But compelling scenes can thrust forward candidates and transform how voters view them. Such was the case on a frigid February morning in 2007, when Barack Obama began his historic campaign with a lofty speech on the grounds of the Old State Capitol in Springfield, Ill., that evoked Abraham Lincoln.

Conservative icon Ronald Reagan carefully orchestrated his November 1979 rollout. The former California governor was perceived as a Westerner, so he announced his bid in New York and then campaigned in Boston. Jim Hooley, a former Reagan advance staffer, said that the itinerary helped “get him introduced to the Northeast as a working man’s guy with lots of blue-collar labor events and hard-hat stuff.”

Sophisticated campaigns can also use packed events as organizing tools, as Obama proved. “He did them brilliantly. If you go big, it gives you an opportunity to collect e-mail addresses and build a grass-roots network,” said Tad Devine, a Democratic presidential campaign strategist who advised Michael Dukakis, Al Gore and John F. Kerry and now works with Sen. Bernard Sanders (I-Vt.).

For the rivalrous band of Republican hopefuls, these early-stage debuts could be critical breakthroughs.

“If they can work magic with the announcement, that’s their first great shot,” said Fred Davis, a Hollywood-based media strategist on past Republican presidential campaigns. “The priority for every single one of these is to springboard the announcement into being in the top tier.”

Jeb Bush’s allies speculate that he could start his campaign from Florida’s capital, Tallahassee, which would highlight his conservative gubernatorial record. Or he could choose a successful urban charter school, showcasing his lifelong commitment to education reform and his “right to rise” slogan.

Ben Carson could announce his candidacy in “bombed-out Detroit,” suggested activist Vernon Robinson, who leads a group trying to draft Carson to run. He pictures the celebrated neurosurgeon returning to his home town to give a speech outside the elementary school where he was teased as a boy.

A Rick Santorum adviser said the former senator probably could begin in a blue-collar setting in Pennsylvania, where his grandfather worked in a coal mine. Attire also is part of the calculation. “It’ll be a suit, but with the jacket off and sleeves rolled up, since he’s seen as someone who’s not afraid to be a fighter,” said the adviser, John Brabender.

Donald Trump wants to leave a more ritzy impression. The billionaire real estate mogul, if he runs, said he is eyeing his gleaming Manhattan skyscraper, adorned with pink marble and brass. “Trump Tower is fantastic — 57th Street and Fifth Avenue, with an atrium that can hold thousands of people,” he said. “In the history of running for president, no one has the sites I have.”

Carly Fiorina, a former Silicon Valley executive, plans to make mobile technology and social media centerpieces of her campaign rollout, probably in late April or early May. “Carly is obsessed with her iPhone 6 Plus,” spokeswoman Sarah Isgur Flores said.

Might former Texas governor Rick Perry stage an announcement in his childhood home of Paint Creek, highlighting his rural, impoverished roots, or in a military setting as an homage to his time in the Air Force?

Will Wisconsin Gov. Scott Walker, campaigning as a suburban Midwestern everyman, wear one of his treasured Kohl’s shirts or ride in on a Harley-Davidson motorcycle?

And what about Clinton?

She announced her 2008 campaign in a softly lit and slickly produced video. “I’m beginning a conversation with you,” she said, sitting alone on a living-room couch.

This time around, unlike lesser-known Republican contenders, the former secretary of state does not need a splashy entrance to gain notice. Some Democrats think Clinton should opt for understatement and accessibility — with real people around her — so the global celebrity can reconnect with ordinary Americans and show that she won’t take the Democratic nomination for granted.

“She needs to convey a sense not only of understanding the challenges Americans are facing but a level of empathy with them,” said former Pennsylvania governor Edward Rendell, a Clinton ally. “I’d do a live announcement in front of people to add some excitement. . . . I’d think about doing it at a place that pays workers the minimum wage.”

In the 2008 race, John Edwards became one of the first Democrats to announce his bid when he gave a speech on a debris-strewn property in New Orleans’s Ninth Ward, ravaged by Hurricane Katrina — a backdrop designed to symbolize the former North Carolina senator’s populist “two Americas” message.

John Davis, a former Edwards aide, suggested that Clinton could stage her announcement in a working-class Iowa or New Hampshire setting, such as a diner. “That could serve as an anchor to reintroduce herself yet again,” he said.

The luck of the draw

The most choreographed events can be spoiled by bad luck. Ahead of the 1996 race, then-Sen. Richard Lugar announced his campaign in downtown Indianapolis, the city he once served as mayor. But his jazzy entry was overshadowed by the Oklahoma City bombing that morning. “Poor Dick Lugar,” recalled Scott Reed, who ran rival Bob Dole’s campaign. “He never got out of the starting blocks.”

Kerry formally launched his 2004 campaign in front of the aircraft carrier USS Yorktown in South Carolina, with his Vietnam War crewmates at his side and U.S. flags fluttering. But the sun that day was broiling, and Kerry spoke long. “We had 100-degree heat,” Kerry adviser Robert Shrum said. “These things can sometimes get messed up.”

Mother Nature also conspired against Tim Pawlenty. When the former Minnesota governor launched his 2012 campaign from Iowa, he recalled: “I’m trying to read my speech, and the sun is right on top of the teleprompter. I couldn’t see a thing.”

Seeking a showbiz spark and an audience beyond political junkies, some candidates have announced on television. Former Tennessee senator and actor Fred Thompson did so cracking jokes with Jay Leno on “The Tonight Show” in 2007, while Ross Perot made headlines when he told CNN’s Larry King in 1992 that he might run for president.

Decades ago, before cable television and when party bosses had a more central role in the nominating process, presidential candidates would wait until the year of the election to enter the contest, partly to conserve resources. But with the shadow primary now all but starting the day after the last presidential election, the campaign season is never-ending.

“You’ve been speculated about, kidded about, and you need to get in it in a way that is definite and certain and uncompromised,” said Tom Rath, a New Hampshire-based adviser on past campaigns.

One reason Cruz, Paul and Rubio are the first to announce is that, as federal officeholders, election laws prohibit them from strategizing with their would-be super PACs. No such restrictions exist for governors or others until they become federal candidates, providing an incentive for hopefuls such as Bush and Walker to delay officially entering the race.

Cardenas said that Bush is “not in a hurry to do this. . . . That can’s been pushed down the road a little bit.”

Strategists said the staging of launch events is not as consequential as it may seem at a campaign’s outset. George W. Bush had fun with the supposedly momentous occasion by calling his 2000 campaign start the “Great Expectations” tour.

“The difference between your announcement and the actual campaign is like who you marry versus who you go to prom with,” said Stuart Stevens, a former Bush adviser and chief strategist on Mitt Romney’s 2012 campaign. “Who you go to prom with seems to matter a lot at the time, but in life’s flow, it’s not that important.”

Some operatives say the impact of traditional announcements has been diluted.

Kevin Madden, a former Romney and Bush aide, said that events now are “framed up in the digital space in the first six hours, rather than how it was in the past, when we were very concerned with what the pictures would look like over the next few days on TV or in print.”

“Your campaign announcement is in many ways your opening night,” he said, using a Broadway analogy. “You’ve allowed the critics to come in and begin to write their reviews in a way that matters.”