#GOPdebate is over and GOD didn’t talk to them. Or did He? 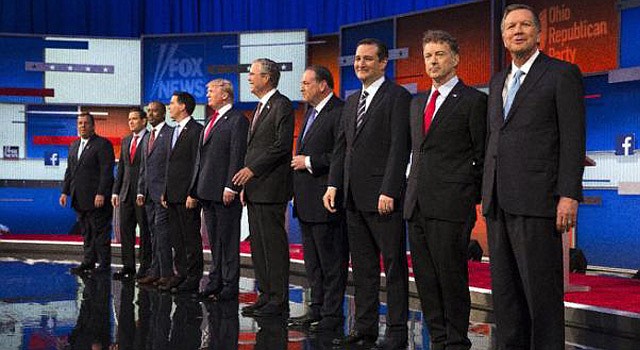 What follows is a summary of my tweets during the first GOP debate on Fox/GOP news TV Channel. The tweets have been expanded for a question of clarification or understanding. Here we go with my tweet-thoughts. Not necessarily in the order you read:

1.Rubio made a name for himself tonight, August 6, 2015. Trump was Trump and Jeb Bush was solid. And then the rest. But all looked well rehearsed.

2.Rubio: GOD is with the GOP. In the end, this became The #GODdebate: He —the Allmighty— wants America to lead.

5. Trump says that he gave money to Hillary Clinton. His ROI (Return On Investment) was that he got her as a guest at his wedding. It sounds like a bad business deal to me. Right?

6. Trump: All the people on the stage I have given a lot of money… Not me! says Rubio.

7. Paul on Trump: He is used to buying politicians.

8. It seems to me that all the candidates know the Qs they are going to get and they deliver well #GOPdebate.

9. Trump talks about “dishonest journalists” who don’t quote him right. NOTE: If you don’t quote the Donald right you are not “dishonest” you are just a bad reporter. It is impossible not to transcribe correctly Trump’s sentences: He regularly utters clear soundbites, simple minded headlines, for a press starving for noise and lacking any interest in ideas.

10. Trump: If it weren’t 4 me, we wouldn’t be talking about immigration. Really?

11. Bush: There should be a path to legal status, Not an amnesty for undocumented immigrants.

12. Huckabee: Apply 5th and 14th Amendments of the Constitution to the unborn child.

13. Trump says he might run as an independent if he doesn’t get elected. Is this the right quote?

14. Trump: the problem with America is political correctness. What I say it is what I say. (Is this the right quote?)

15. Jeb Bush: I am my own man. NOTE: I was waiting all #GOPdebate to hear this statement. Vice president Al Gore said the same thing 15 years ago in order to distance himself from Bill Clinton’s legacy. Gore lost to Bush The Second. Will a Second Clinton lose or prevail versus a Third Bush? Will Hausmachtpolitik —or how to expand the family power base— be a factor in 2016?

16. Rubio: with me we will be the party of the future

17. #GOPdebate is over and GOD didn’t talk to them.