"Go back to Univision!" 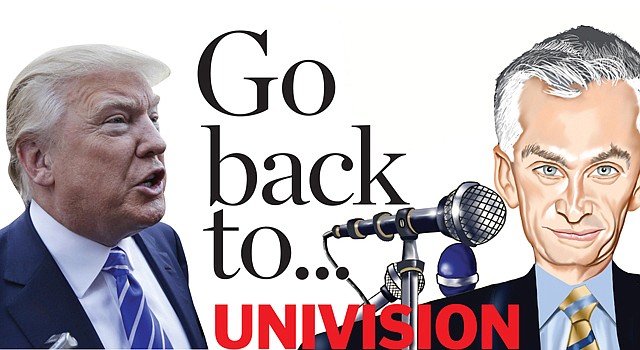 The aspiring presidential candidate for the Republican Party, Donald Trump, has achieved what many politicians can only dream of: leading the polls and becoming the focus of unrelenting media attention.

On August 25th, the latest chapter of the Trump soap opera included a xenophobic or anti-Mexican theme (“Go back to Univision!”), a declaration of love for his thousands of Hispanic employees (“I love them…they love me”), a stab at Jeb Bush — currently Trump’s primary competitor for the Republican nomination — by calling him “incompetent,” an explanation of how Trump would build a 1,200 mile wall on the southern border (“Very easy, I am a builder”), and the rationale as to why Trump, and only Trump, is capable of solving the immigration crisis in the United States and any other problem that is presented before him in the Oval Office (“I am a great manager…I hire incredible people”). This extensive declaration of Trump’s principles was articulated in one rushed conversation with Univisión journalist Jorge Ramos.

A few minutes earlier, Ramos had been escorted out of the room by a member of Trump’s security team. Ramos was heated and Trump would not give him the floor. Outside of the room, followed by a camera, Ramos was berated by a man who told him, “Go back to your country!” Ramos countered by informing the man that he is an American citizen, to which the man said, “Whatever!”

After those tense moments, a member of the Trump campaign indicated to Ramos that he could now return to the press room. What ensued was a hasty exchange between the microphoned politician and the un-microphoned reporter. The debate, though unbalanced, shined a light on worthy themes that must desperately become integrated into the national dialog. For instance, Trump spoke on the 14th Amendment of the Constitution — the amendment that guarantees American citizenship for children born in the United States regardless of the origin or legal status of their parents. And the immigration issue always perversely labeled by politicians like Trump as a criminal matter, regardless of statistical evidence and diverse economic research to the contrary.

Rewriting the Constitution and reforming a broken immigration system will not be accomplished through Trump's incessant yelling, populist slogans, or the spreading of apocalyptic scenarios: Malicious hordes of illegals jumping over fences and looking for a place to pop out a baby, rape women or commit all kinds of crimes.

One of Trump’s biggest flaw, —which is admired by his thousands of supporters—, is the way in which he articulates and perceives real problems that directly affect many American families. Trump could reasonably discuss how he hopes to mitigate the problems associated with the 14th amendment or how he plans to establish a rational and humane guest worker program. In fact, one of the great Republican voices, Helen Krieble, has for many years promoted a plan known as The Red Card Solution, which connects foreign workers with American businesses that are looking for labor. However, the Republican Party and Mr. Trump have not given any attention to Krieble’s proposed program. It appears as though the only “humane” method for the “great manager” to act on the issue of immigration is through mass deportation. Without a doubt, a Trump administration would shatter any deportation records set under the Obama administration.

If you want numbers, go to Google. I will say it in a simple manner. The way Jorge Ramos has been saying it for years: Immigration does not bring crime to the US, quite the opposite. It is a source of wealth and one of the economic engines of this great nation. If Trump is the great “manager” that he claims to be he should start by managing his country’s reality from a positive perspective. Immigration needs to be properly managed in order to not hold hostage millions of workers who long to move freely in and out the country that employs them. This would certainly avoid the forced citizenship that Republicans so much fear.

Jorge Ramos has the right to be an annoying reporter, even to be impertinent. Donald Trump, as a politician and somebody who aspires to become a public servant, cannot treat a reporter as an uncomfortable chair he moves in or out of his press room depending on his whim.

It seems obvious that Trump’s “business model” works well for the candidate and perhaps also for the rich businessman —as evidenced by the multi-million dollar lawsuits against Ramos’ company, Univision, chef José Andrés and others who have piqued his anger. But Trump’s political model lacks the vision and the mission of a leader who needs to understand that the US is increasingly more urban, more mixed —meaning more racially and culturally sophisticated.

Trump needs to understand that this country is experiencing a transformation at a technological level, in the labor markets, and in its religious fabric. That there is a new morality in the streets of the country and that the military and financial threats to the nation are globalized. That a 21st-century politician must understand that theses changes mean the arrival of a new nation. And that resistance to accepting and managing the new reality of a changing and emerging nation will only bring disaster.

That is why Ramos has the right to incessantly ask questions and that’s why Trump has the obligation to articulate answers that reflect a new American reality. But he has yet to do so.