The importance of Averroes 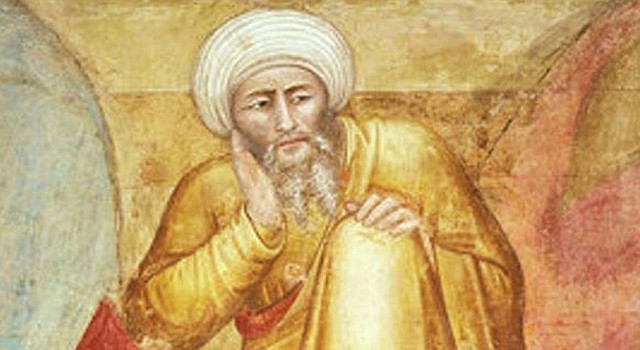 Although Thomas Aquinas and later philosophers owed Averroës a major intellectual debt, they also fiercely criticized his writings.The depiction above of the Islamic philosopher is a detail from the Triumph of St. Thomas Aquinas in Santa Maria Novella, Florence. In the fourteenth-century fresco, Andrea di Bonaiuto placed Averroës with the heretics Sabellius and Arius in the space beneath the saint’s throne.

He aimed at creating harmony between faith and philosophy by claiming that Aristotle was right and Quran was the eternal truth.

Averroes saw religion second only to philosophy. Philosophy, he seemed to imply, should decide what to be interpreted allegorically and what literally.

But the Iberian Muslim thinker lost his intellectual battle —some of his writings were burned— and what prevailed were the principles that emphasized the weaknesses of human understanding and promoted the need for a strong, unquestionable faith. Undoubtedly, Averroes’s rationalist views collided with the orthodox views of his powerful contemporaries.

Had Averroes’s thought been accepted by the Arab political establishment of his time today’s relationship between the Arab world and the Western world would be different —closer?

I might be incurring in wishful thinking or worse, philosophical fantasies. Christian Europe in the Middle Ages and later suffered from the same fundamentalist religious arrogance as did many other theocracies. Averroes has been described as the founding father of secular thought in Western Europe, but indeed it would take centuries for these views to materialize into civil societies and tolerant democracies.

Averroes (1126-1198) —Ibn Rush, in Arabic— was born and buried in Córdoba (present-day Spain). He lived at a time when the Arabic and the Islamic empire developed a civilization that fostered education and priced literature, philosophy, medicine, mathematics, and science. This was a period when many cultural leaders were not only Arabs but also Christians and Jews.

Today’s gap between the Western and the Arab world needs thinkers to build bridges. We have an overabundance of prophets and soldiers ready to spread the rage of any given god on the face of the earth, and a clamorous lack of thinkers, relationship builders.

Somebody such as our Medieval Averroes ready to engage philosophers and theologians, god and the cosmos. We cannot quiet the noise of intolerance nor mitigate the pain of a bullet with the simplicity of a pencil. We shouldn’t be forced to choose between the pen or the sword. It is simpler than that. We need to think about the human community we share. We cannot stuff up with liberty and principles a few organs of our world body while we starve or bleed to death the other half of our humanity. Only tolerance and human discovery through dialog works against intolerance.

Hate is not an Arab word.

Only God —Love— is the source of all plurality even though he is simple and changeless, Averroes said.