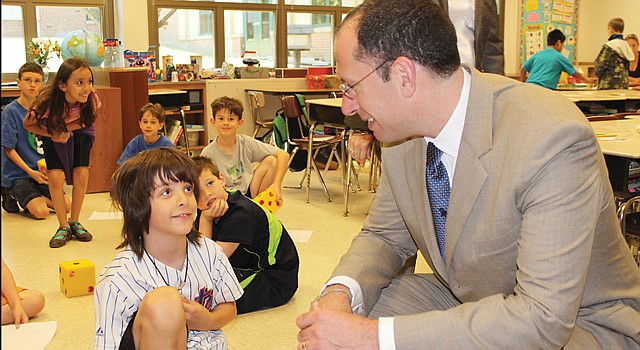 Over the past three years, the graduation rate for Hispanic students has risen 4.7 percentage points, and the gap between Hispanic and White students has narrowed by 3.4 points.

I received the news in the form of a press release. First, Tomás Silvani called me. Silvani is Public Information Officer for Montgomery County Public Schools. And he knows that a journalist is always on deadline. So he started with a headline —”Graduation Rate Rises, Gap Narrows for MCPS Class of 2014”— and before I could say “Wow!” he gave me nutritious food for my Hispanic-angled mind: The graduation rate for Hispanic MCPS students jumped to 80 percent in 2014 —a one-year increase of 2.5 percentage points. Over the past three years, the graduation rate for Hispanic students has risen 4.7 percentage points, and the gap between Hispanic and White students has narrowed by 3.4 points.

As a journalist covering the US Hispanic community, and as a parent who helped raise my two children in MCPS schools, I was happily impressed. So, Where is this data coming from? —I asked Silvani—. “The Maryland State Department of Education (MSDE), released on Tuesday, January 27, 2015”, he said and added that the the graduation rate for all subgroups of students rose in 2014.

For African American MCPS students, the graduation rate rose to 86.4 percent in 2014, a one-year increase of 2.5 percentage points, according to the MSDE data.

Among the 2014 graduation rate results for the 25 MCPS high schools:

When you have graduation increases in high schools such as Wheaton, Albert Einstein or Rockville, you know that the Hispanic students are doing well. However Hispanic MCPS students graduation rate (80%) is still behind “White students” (95.2%), “African American students” (86.4%), and “Asian students” (97%). The good news is obviously that the gap between Hispanic and White students has narrowed.

My question to MCPS leadership is how they are handling the migrant kids crisis, how this could impact the system, and what specific measures they are implementing to help academically the 1,200 minors that are currently in the school system. County Executive, Isiah Legget, was very clear, January 26, when he said to El Tiempo Latino that he wants these kids “to move through the legal process and ultimately obtain a green card.”

Is MCPS ready? Silvani told me that Superintendent Joshua Starr will talk to me soon.