“Risers” is a documentary featuring 4 local achievers in Washington, DC 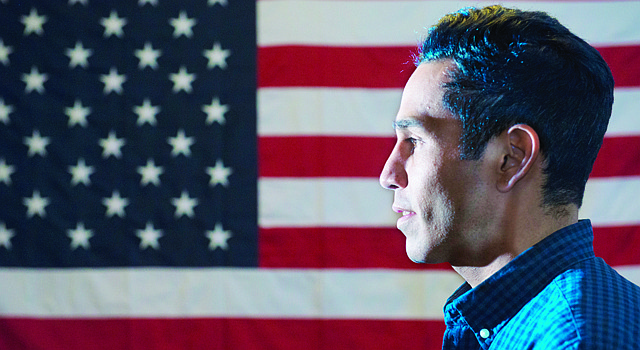 A young woman is riding a bicycle through Columbia Heights, Shaw and other Washington neighborhoods where so many immigrants live. The scene shifts to marchers in front of the White House chanting, “No more deportations.” Then back to the bicycle rider, whose voice is heard reciting a poem she wrote called “Being an Immigrant Is Not a Sin.”

We are no longer dreamers

Because we are wide awake

We have risen from the ground

In this country our home we

An unusual video and photography project by filmmaker Andy Fernández locates the mind-set of the next phase of the immigration reform movement and even gives it a name: “Risers.” While Congress, the White House and the courts are stuck bickering over the same old details, young undocumented immigrants - known as “Dreamers” - are pulling themselves up into sometimes extraordinary lives.

The transition is signaled in the bicycle rider’s poem: “no longer dreamers,” but already “wide awake” and “risen.”

The young poet is Aura Álvarez, 22, who made the trek from Guatemala when she was 13 to be reunited in Washington with her mother, whom she had not seen since she was 5. She learned English, got top marks in high school and earned an associate’s degree from the University of the District of Columbia. Now she works as a dental assistant while studying for a financial services license.

Álvarez is one of four undocumented immigrants in Washington on whom Fernández focuses, along with Brenda Pérez, 19; Gerson Quinteros, 20; and Douglas González, 22. All arrived as unaccompanied minors to find parents who had immigrated earlier to provide for their families.

The project is hard to define, not just because Fernández is working in both video and photography. After the effort began a year ago, word spread, and the director of the work-in-progress and his protagonists began receiving invitations to visit high school classrooms and after-school programs. “Risers” became a road show.

Some of those audiences consisted mainly of non-immigrants. To them, Álvarez and her cohorts would confide the realities of undocumented lives - the dangers of the journey, the bittersweet reconnection with parents, the obstacles to paying for college, the fear

In front of groups of immigrant students, they offered practical advice on how to make it in a not always welcoming new land - how to find scholarships, how to apply for temporary legal status, how never to give up.

“People might think I’m crazy, but I want to build a business and create hundreds of jobs,” Álvarez told a class of 12th-graders at the Maret School. “I have a work permit; I’m here to stay.”

A girl in the class had tears in her eyes. Her mother is from Perú, she said, and she has an undocumented cousin.

Fernández folded these encounters into the film and photography, and they shaped the result in ways he hadn’t expected.

“Who am I making this film for was always the question,” says Fernández, 36, the American-born son of Bolivian immigrants, raised in North Arlington. “I think it’s turned into really a piece for young immigrants. They’re going through the exact same challenges” as the four in the work.

The four do not fear that the project will call attention to them. They qualified for temporary legal status offered by the Obama administration, allowing them to work while pursuing college. On the contrary —even though the temporary protection from deportation could be canceled by a future administration— they welcome attention being paid. “I want everybody to know about us, the whole United States, because I believe we’re an example that you can accomplish anything,” Álvarez said in an interview.

“Risers” is having a preview weekend at the Hierarchy Gallery in Adams Morgan, and Fernández is planning additional presentations at Hierarchy or other spaces in town. Rather than create a straight, short documentary, Fernández opted for something more stylized and fractured. The video is distilled to a 20-minute collage of the four lives, along with large photographic portraits of the characters.

“It’s a mosaic of who they are, but still trying to make a statement about their identity and place in the community,” Fernandez says. Quinteros, from El Salvador, who is seen in the film introducing Michelle Obama at a school assembly, just finished his sophomore year at UDC in computer science and works as a soccer coach. González, also from El Salvador, is a musician active in his church and works at a gourmet sandwich shop.

“My whole view is, they’re American,” Fernández says. “The reason they’re not on a pathway to citizenship is all political.”

Yet the four young people are more ambivalent about their evolving identities. One of Fernández’s techniques is to create “living portraits” in video, where the subjects stand mutely against an American flag backdrop, wrapped in the flags of theirhome countries, while their voices are heard grappling with who they are. “It’s a real identity crisis,” Pérez says in the film. She realizes that soon she will have lived half of her life in the United States. She just finished her freshman year at UDC studying civil engineering and works as a community organizer for Many Languages One Voice. In March, she was invited by Harvard Law School to speak on a panel about undocumented students’ access to higher education.

“I want to say that I’m Mexican, but I can’t,” Pérez continues. “I have to assimilate to American culture. I feel like a piece of paper in water slowly dissolving. The paper will never transform to water, but it will never be the paper it was before.”

Says Alvarez in the film: “Even if I become a citizen, it’s really hard to ever consider myself American. I want to live here for the rest of my life, and one day when I have my children, they will be American.”

When it comes to identity, Fernández realizes what a difference a generation makes. He feels thoroughly American. But as a first-generation American, he possesses a heightened sensitivity to how identities are formed and shed, an awareness that permeates “Risers.” In the Arlington schools Fernández attended, there were relatively few Latinos.

“My identity wasn’t Latino in any way, other than the fact I was a first-generation American and my name is Andrés Fernández, not Andrew Fernández,” he says. “I was always embarrassed when we had the first day of school, when they did the roll call. The teacher would say, ‘Andres Fernandez.’ I was like, ‘No, I go by Andy’ . . .”

Fernández worked for the Environmental Film Festival for several years, then became a commercial real estate broker. Now he is back to film. He has a business shooting promotional real estate videos, and he makes pieces about Latino youth culture.

“It’s like I’m reestablishing my Latino identity through art and through film,” he says. “It’s almost as if it was waiting to happen in the back of my head. . . . I really am proud of being Latino. And I’m proud that my parents are from Bolivia and I come from this bilingual, multicultural background.”