The Powermeter in Washington, DC 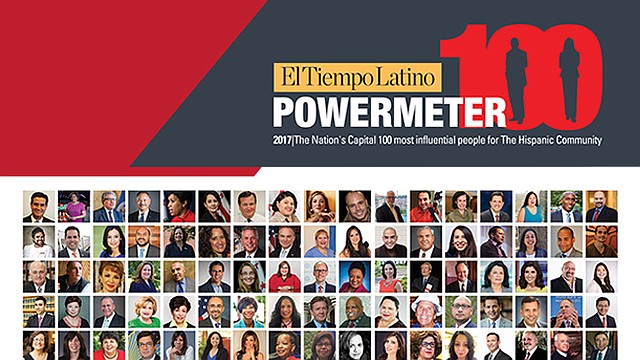 This inaugural Powermeter is a case in point of how the Hispanic talent has managed to succeed in business, in academia, advocacy and politics.

Roger Santodomingo | Editor of The Powermeter 2017

This is a unique sought-after list of the 100 most influential people for the Nation’s Capital Metro Area Latinos. The Powermeter 100 list is a testimony of the influence that these 100 powerful individuals have had in the Hispanic community and the community at large. In order to select the 100 individuals that comprise the list, El Tiempo Latino holds a nomination process open to the public. With more than 400 nominees collected, a panel of judges from the community and the paper’s editorial council selected those, whom based on their merits throughout 2016-2017 deserve to be called “one of the 100”. The Powermeter 100 list is presented in alphabetical order by last name.

Most people think that Washington is a city of power and for power; a boring town where the only thing that dominates conversations is politics. Others see it as an ill-fated town where many times mistaken decisions that affect the rest of the world are taken. From President Donald Trump, who just came to town promising to “drain the swamp of politicians”, to Hillary Clinton who has “denounced Washington" —but has lived for decades in DC and is part of its elite— and standing as a candidate sought to distance herself from what happens here.

Biased visions like that, amplified by propaganda, news, and even Hollywood, have nurtured the capital’s bad reputation: the city where anything goes, and everybody is seeking to gain or retain power, a city of inept bureaucrats or corrupt politicians like Frank Underwood of House of Cards. And they're right. But not quite right. This city is much more. Politics and power struggles are not the only or necessarily the most important thing going on here.

But what is actually surprising in Washington is that around the Mall, the majestic buildings and constant political conversations, has grown one of the most diverse societies in America. Most city dwellers come from different parts of the US and of those who were not born here, nearly half, 48%, come from the Americas. The Hispanic presence in the surrounding states of Maryland and Virginia is even greater, almost double proportionally to the DC. The Great Washington is a powerful attraction magnet for Hispanics, and that is what is reflected in the diversity of the 100 most influential people in the 2017 Powermeter.

This Powermeter reflects not only the diversity of the Hispanic community but its growing influence in various walks of life in the city. Washington is a multifaceted city that offers a vast range of opportunities beyond the Capitol, the White House, and K Street. Moisés Naím —the Venezuelan author of The End of Power and an authentic Washington insider—, has said that the secret of the capital is not that it is the center of world power par excellence and the scene of the most Machiavellian conspiracies. The surprise is that it is a beautiful and wonderful city that is home to millions of people whose life and relationship with the city goes beyond power bids and power networking. This is a city of great universities, the capital with more parks in all the country, the place for world-class science centers and museums and where the most vibrant multicultural activity exist.

This inaugural Powermeter is a case in point of how the Hispanic talent has managed to succeed in business, in academia, advocacy and politics.

Of course, when pretending to measure power and influence in Washington, the scale may look deformed and skewed given the disproportionate power that some individuals living in this city exercised nationally and even globally. 2017 is the year that Hispanic representation —even though it is still way lower than its population contribution– has reached the highest level in Congress, but is also the year with the most diminished presence in the White House. This both in terms of elected officials and senior staff as key government functions.

Of course, not all fit the profile of the elite that has been naturally drawn to this center of political, military and financial power. It is also true that many Hispanics have not been ever near the opportunities offered by the capital. About 12 percent live below poverty, and those who only have a primary education are almost the same number of those with a college degree. It is therefore just natural that in this first Washington Powermeter 100 stands a crop of men and women committed to the struggle to reduce inequalities and give the less fortunate an opportunity to escape poverty and prosper.