Is Maduro innocent? Keys to understanding the political motives behind The New York Times video report 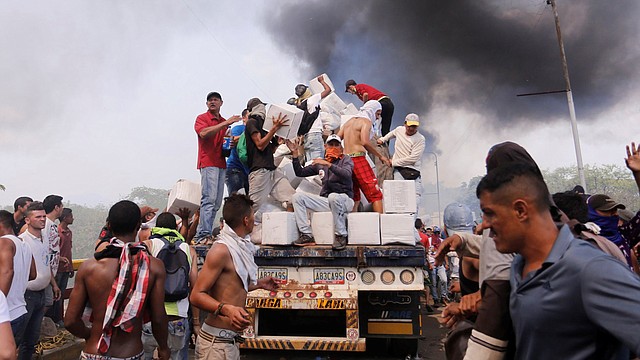 RESEARCH. There is no type of investigation that provides more details on the origin of these hooded “protesters”, nor more information that supports Maduro’s innocence in this aspect. EFE

On Sunday, March 10th , in the midst of the tragic events that have unfolded in Venezuela, where more than 20 states have gone three days without electricity, The New York Times (NYT) decided to air a video, which according to them, depicts evidence of how hooded protesters had presumably burnt down the truck with humanitarian aid that had attempted to enter Venezuela through the Colombian border on February 23rd. Based on the former, according to the New York Times, the regime of Nicolas Maduro is “innocent” of the accusations made by the US government regarding this incident.

In this analysis we broke down the audiovisual material so as to understand the motivation behind the publication made by this media outlet, which seems to undermine the fact that the entry of the humanitarian aid was met by repression and the use of paramilitary forces (“colectivos” and prisoners) which attacked the population that declared itself in favor of the entrance of supplies.

• The NYT piece begins in minute 0:28 focusing on how the administration of President Donald Trump blamed the Maduro dictatorship of burning the humanitarian aid, instead of offering the public concrete facts and details describing how the security forces blocked the access of the trucks carrying the humanitarian aid or showing the repression used against the population that pleaded for the entrance of the trucks. Just in minute 0:28 they (NYT) launched the first capture of a tweet from Senator Marco Rubio, quoting another publication in the social network of Colombian media NTN24, which ensures that the vehicles were burned by the Bolivarian National Police (PNB).

“The investigation carried out by the NYT shows how officials of the US government made accusations without having the complete facts”, according to the NYT´s publication.

• "The Venezuelan crisis reached its critical point at the beginning of 2019, when the leader of the opposition, Juan Guaidó, declared himself president", narrates the video in minute 0:47. However it does not specify the constitutional foundations on which the President of the National Assembly relied upon to divest his functions, nor does it mention what led him to take that legal and legitimate action, (based upon articles 233 and 333 of the Venezuelan constitution), with the backing of an open council held in the capital of the country, Caracas. The NYT also chooses to ignore all those who were assassinated, wounded and detained as political prisoners during the protests of 2014 and 2017, which depict in detail the ongoing crimes against human rights carried out by the Maduro dictatorship.

Articles 233 and 333 of the Venezuelan Constitution, which back up Juan Guaidó legitimacy as interim president, state that:

• In the video report, specifically in minute 1:07 Maduro´s blockade of the Colombian border (in order to prevent the access of humanitarian aid) is mentioned. There are some seconds where the “Puente Internacional Simon Bolivar” (the bridge connecting Venezuela and Colombia) is shown with physical barriers such as what seems to be a fuel loading truck and, on the other side of the road, a huge container.

• At minute 1:22 it is specified that Maduro's security forces repelled the protesters who tried to accompany the entrance of the humanitarian aid truck. There are three seconds of video on screen when security forces throw tear gas. However, they do not offer reports of those injured by the tear gas or the numbers of officials of the regime who defected to Colombia during the operation to repeal the humanitarian aid. Nor do you see any testimonies of people present.

• The narrative of the video report (minute 1:30) singles out the Colombian government of providing manipulated and incomplete audiovisual material, with the objective of implicating the Maduro regime as the cause of the fire, since it high lights police officers right next to the truck that starts to burn. Then, it is affirmed that this video sent by the government of Colombia, was 30 seconds ahead of what they called the "critical moment".

• After 1:59 minutes, the NYT piece displays a non-televised recording - in which the same scene is shown, a few seconds behind, so that the material recoils and later synchronizes with the Colombian government's video security. There you can observe how hooded men throw rocks and Molotov cocktails at the regime's security force barrier, one of the latter diverted to the trucks. However, the audio-visual material does not mention who these hooded people were, but that they are assumed to be part of the protesters, since they were on the same side. Was it an accident? Did the protestors themselves promote it or were they infiltrated? It is not known. Nor do they show the moment when the same protesters rescued what the could from the humanitarian aid supplies while the vehicles were being burned.

• At 2:40 the media concludes that the fire was started by the Molotov cocktails thrown by the hooded men and not by the Maduro security forces.

• Between the minutes 3:04 and 3:05 there is a transition that cuts off the continuity of the recording. According to NYT, it is a video of a presumed journalist who goes to the side where the Molotov bomb that “started the fire” landed and shows the truck in flames.

• Minute (3:19) "This was the beginning of the fire that spread quickly and consumed three trucks," says the narrative, without showing any other evidence, other than the start of the fire with the Molotov bomb in one of the trucks, implying that the two other trucks also burned because of this same action. Evidently, at this point, this is a presumption, not hard facts. There is no more detail of what happened during the time frame in which the fire spreads (READ MORE: PAGE 3).

• The video report openly takes up the political issue at minute 3:36, with which it began and says that the incident rapidly became a "political storm", as the NYT itself called it.

• (3:40) At this point, they rerun the NTN24 tweet, initially quoted by Marco Rubio and re-launch the same senator's tweet with the quote. Then, a few seconds later, John Bolton's tweet appears on the screen again, and by minute 3:50 it is time to discover the tweet from Mark Green, administrator of USAID.

Masked thugs, civilians killed by live rounds, and the burning of trucks carrying badly-needed food and medicine. This has been Maduro’s response to peaceful efforts to help Venezuelans. Countries that still recognize Maduro should take note of what they are endorsing. pic.twitter.com/KlSebd2M5a

#Maduro ordering the firing on and burning of trucks filled with
humanitarian aid & attacking volunteers is unconscionable. I condemn the killings & human rights abuses committed by Maduro. Violent attacks against life-saving aid for #Venezuela is despicable. #EstamosUnidosVE https://t.co/BOSuVP1mTL

We denounce Maduro’s refusal to let humanitarian assistance reach #Venezuela. What kind of a sick tyrant stops food from getting to hungry people? The images of burning trucks filled with aid are sickening. pic.twitter.com/bJ1Qsxkgx8

While Senator Rubio's tweet says that the police had burned the trucks with humanitarian aid based on the NTN24 tweet, Bolton, Green and Pompeo do not make such accusation against the troops but hold Maduro responsible (without specifying the routes or people used for that purpose). However, the audiovisual piece shows the dictator as innocent, because the aid allegedly had been burned with a "Molotov" bomb by Guaidó protesters themselves

There is no type of investigation that provides more details on the origin of these hooded “protesters”, nor more information that supports Maduro’s innocence in this aspect. In other words, the political issue gains force over the objective of the aid, which would be offered to a country in humanitarian crisis. There is no talk on figures of the chronically ill and malnourished, or patients in need of dialysis or insulin, nor of the use of paramilitaries to repress the protesters. Additionally, Guaidó himself confirmed the use of uniformed prisoners by the regime for such purposes (Abrams himself says so in a segment of his statements).

Although the benefit of the doubt as to the authenticity of the material obtained is due and taking into account the credibility of the media that publishes it, that seems to be a political focus against President Donald Trump administration, that is highlighted for beyond the emergency that the country is living, which In journalistic terms, has many edges.

• (3:59) They claim that none of the officials offered evidence to support their claims, but NYT also failed to prove who were the hooded people, nor carried out an in-depth investigation, but instead released Nicolás Maduro from blame, in a paper published in the middle of the largest political and socio-economic humanitarian crisis that the Caribbean country has experienced in its history, which at the time of publication remained in darkness for more than three consecutive days due to widespread power failures.

"... armed criminals released from prison, mobilized to control the border, their actions led to the burning of humanitarian assistance, instead of their protection," Elliott Abrams said at UN security council

• (4:35) "It is true that Maduro has a horrendous registry of human rights and that he deployed armed gangs called colectivos, to terrorize the opposition, but in this specific incident, our analysis shows that US officials used unverified allegations to Turn the story around. " The medium issues this affirmation in the narrative as part of an editorialized commentary to try to balance the political motivation of the work, but they do not offer evidence of this. No matter how certain it might be is still an opinion. They do not offer attributed figures, official statements, witnesses, etc.

The video report ends with the clarification that the officials contacted to testify about this investigation did not comment, while using the audiovisual work to expose the media's perspective on spreading fake news online or through Social Media.

"A rumor or unproven claim is made. It’s amplified by influential people. Mainstream media brings it to the masses. And in this case, there were real-life consequences", concludes the narration, while making a key closing: the vice president of the USA, Mike Pence, announces more sanctions against officials of the Maduro dictatorship.

Times that tweets or interventions of Trump officials are displayed on the screen:

This article was originally published in Spanish: