"I will always be the same humble person"

Salvadoran businessman and activist Manfredo Mejía has more than 30 years of experience in the Washington D.C. area 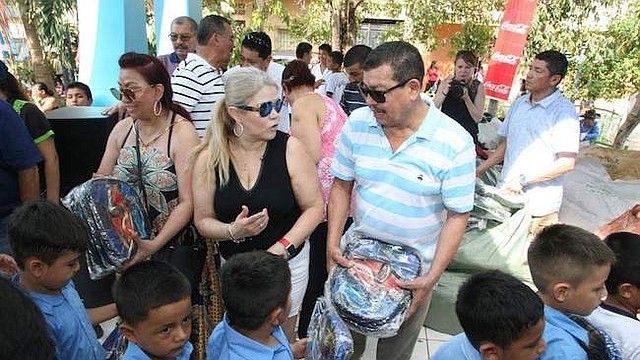 His name is known in the active community of Salvadorans in the Washington area, but also in Intipucá and San Miguel in El Salvador.

Manfredo Mejía, who emigrated from "el pulgarcito" four decades ago, is an entrepreneur, who does not forget his roots and promotes Salvadoran culture in the United States.

He is part of the Arlington-San Miguel Sister Cities Committee, through which cultural exchanges since 2006 and social work have been carried out in the poor areas of that region of the country.

Mejía owns the restaurant Atlacatl in Arlington, Virginia, an icon in the midst of modernization with large buildings in the Columbia Pike corridor.

His leadership, simplicity and commitment to the community and social work is being recognized by El Tiempo Latino’s Powermeter award.

Those who know him applaud the recognition. "He is a businessman with over 33 years of experience, who has overcome great challenges. He is an example for us of persistence and solidarity. He and his family represent an important contribution not only to the Salvadorans and the people of Intipucá, but to the community in general, "said Joel Martinez, current president of the Arlington-San Miguel Sister Cities Committee.

Like many immigrants who came to the United States looking for a better future, Mejía emigrated with his wife to this region. From his work as a farmer in El Salvador he transition to the kitchen.

"I started washing dishes in a restaurant, then I was a kitchen assistant, then a cook. Thank God I was then made head chef in one of the most prominent Italian restaurants in Washington D.C., "he said.

In 1995 he partnered with his brother-in-law to open a small restaurant in Washington DC.

In 2000 he moved to Virginia and opened the restaurant Atlacatl. "Since then I have worked with my family and we have done well," he said.

Mejía arrived in the United States in 1975 and settled with relatives in the District of Columbia. "There were just few Latinos in the area. The majority of us lived in Mount Pleasant and Columbia Road neighborhoods," he said.

At that time, immigrant aid organizations were few and Spanish was rarely spoken. The migration of that time was mostly Caribbean.

Today Hispanics in DC represent more than 10 percent of the population and by law, service agencies have a system to offer care in Spanish.

Mejía is a co-founder of the Arlington-San Miguel Sister Cities Committee, an initiative launched in 2004 by former Arlington councilor Walter Tejada. "I'm an active member in the committee. I have been president, secretary and treasurer, desiring to help." he said.

"The committee is alive thanks to the persistence of Manfred," said Martinez.

According to Martinez, the committee has helped schools and other San Miguel organizations with a total of $120,000, including purchases of computers, school supplies and humanitarian aid.

"We have helped roof a school in Intipucá and each year we distribute 1,500 backpacks to the children," said Mejía.

One of the main sources of fundraising for the committee is its participation in the San Miguel carnival that takes place in November.

Each year, Ciudades Hermanas holds the "Miss Sister City" pageant where they choose the Queen of the organization, between several candidates residing in the metropolitan area of ​​Washington and the cities and towns of El Salvador.

The queen of the event is elected by the sale of votes and in this way the young women, together with the communities they represent, strive to obtain the greatest number of votes to be crowned.

Once crowned, the new sovereign prepares for her participation in a float, which represents Salvadorans living in the metropolitan area of ​​Washington DC.

The event "Miss Sister City" allows the organizers to raise the funds for the purchase of computers, sports uniforms, and teaching materials, that will be delivered to educational centers on greatest need in El Salvador.

Despite the success, Mejía has not lost his essence and says "I will always be the same humble person who came here without anything, but grateful to God and life for what I have achieved," he said.

Mejía has been married for more than four decades. He lives in Virginia and has four children, three girls and one boy.