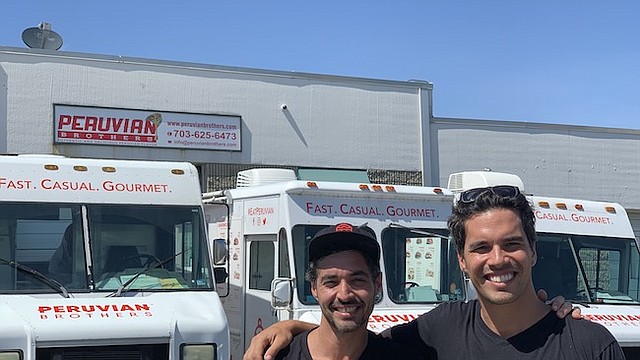 They began the madness six years ago. Two brothers: the eldest, a former Olympian; and the youngest, a sailing captain in the Mediterranean, opened a food business on wheels that is becoming known every day, the Peruvian Brothers food truck.

Giuseppe and Mario Lanzone travel with their food trucks through several points in Washington DC, bringing the flavor of Peruvian food to a multitude of several countries.

"We have been growing little by little thanks to God. The people have accepted us well and we are expanding," said Guiseppe Lanzone, who was part of the US Rowing Team at the Beijing Olympics in 2008 and the London Olympics in 2012.

"At first we were just the two with a humble little truck. We did all the work, getting up very early and without resting. Then we began adding people to the team," said Mario Lanzone, who for eight years managed a yacht for a private family in the Mediterranean.

They started the business with just one small food truck. Now they have three; and a team of 15 people, who -they say- are the key to their success.

"We have a fantastic team. People of good principles and values. That is what we are looking for. It is a plus if it happens they know how to cook", said Giuseppe.

Soon, Peruvian Brothers will open its restaurant at La Cosecha Market, the Latino Market that will open its doors this summer in Washington DC.

"We will be hiring 15 more people. Now we are in the search," said Guiseppe.

Their mother was the mastermind behind the idea of Peruvian Brothers. After spending several years abroad, Giuseppe and Mario returned to resettle again in Northern Virginia where their parents lived.

"After 12 years away from home, I for the Olympics and Mario living in Europe, we came back home and we asked ourselves 'now what do we do?' We wanted to open a business and we studied the options. We thought of a disco or a lounge, but our mother suggested that we should start with a food truck, "Giuseppe said.

Their mother had observed in them a perfect formula. "I'm in charge of the kitchen and Giuseppe of the sales", Mario smiled.

In fact Mario was a chef without a title.

Giuseppe confesses that when they were students, he would get up later on purpose hoping that Mario would prepare breakfast for both of them. "I liked what he prepared," he said. "On weekends he cooked and everything was good, whether it was barbecue, Peruvian food, pasta, everything," added Giuseppe.

Mario blushes and modestly said that "living in the Mediterranean helped me discover more seasonings".

At first, the brothers evaluated what kind of food they were going to sell. "We wanted to go for the salads and vegetables. But then we said why not prepare the food that we grew up with and show our Peruvian culture to clients? "Giuseppe said.

Mario meticulously prepared, with all the details, the first dish that identified Peruvian Brothers: "Pan con chicharrón" (pork sandwich). "We fix the sandwich like in Peru. With French bread, pork, sweet potato and an onion sauce," he said.

Later, they introduced other flavors such as ají de gallina; chicken and meat empanadas; and several desserts, among others.

They are not only on the main streets of downtown Washington but in events offering catering services. "We have been in the White House, the State Department, the Embassy of Peru, weddings and corporate parties. We are very grateful to God" said Giuseppe.

The brothers emigrated to the USA at the time of terrorism in Peru. "We came as teenagers, when we were between 12 and 14 years old., “ said Mario. “My parents left Peru looking for better opportunities because the economic situation was critical and terrorism was active, "said Mario.

They settled in Northern Virginia and studied at McLean High School.

For the brothers, the sea is an inherited passion.

"All our life in Peru we lived near the sea, in La Punta (maritime city of Callao)," said Giuseppe. Their father was a fisherman. He practiced scuba diving and fishing. "He still does it every so often when he travels to Peru, although less and less, because we need him more here," smiled Giuseppe, who is married and whose wife is also very active in the business.

Their mother is the boss, they both say. "She is who drove us to open the business," said Mario.

Peruvian Brothers goes beyond a food truck. It is an exhibition of Peruvian culture, values and traditions. The white foodtruck with red letters evokes the color of the Peruvian flag. The stamp is a "chullo" (hat) that when turned around resembles a boat with two brothers. On the top of each bottle of rocoto (chile) that they distribute lies a small chullo, created by indigenous people of Peru.

"We want the Peru brand to be known and valued, recognizing the wealth of our country," Giuseppe concluded.